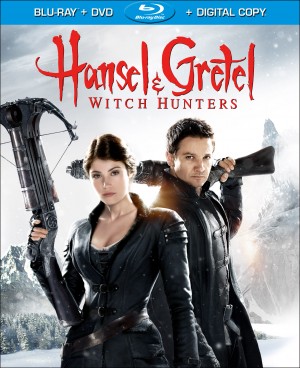 In the wake of revisionist takes on classic fairy tales, it was only a matter of time before someone came up with an approach that was tongue-in-cheek or so over the top it was going to be a wacky delight. I thought that was going to be Hansel & Gretel: Witch Hunters as the adult versions of the classic kids were first seen with crossbow and rifle, decked out in black leather and ready to kick ass. The trailers made it look like it could be tremendous fun and the cast of Jeremy Renner, Gemma Arterton, and Famke Janssen made it appealing.

Unfortunately, writer/director Tommy Wirkola couldn’t decide on a consistent tone for the film so sometimes it was a straight drama, sometimes a dark comedy, sometimes just boring. He’d been harboring the concept since 2007 and the pop culture zeitgeist caught up with him, allowing him to bring the notion to life. Originally slated for 2012 release, it was finally unleashed in 3D in January and now, on Tuesday, it comes to home video from Paramount Home Video. Surprisingly, despite tepid reviews and so-so box office, just this week there’s been talk of a sequel percolating.

In short, Hansel and Gretel survived their encounter with the witch when they were children and grew up to hunt down the rest of the black-hearted breed, hiring themselves out to towns in need. Wirkola amends the legend, codified in print by the Brothers Grimm in 1812, by having the parents gone early on. Additionally, he posits that mom was a white witch, an extremely rare breed whose blood contains special properties.

Muriel (Janssen) wants that blood and knows that Gretel has the blood flowing through her veins. Her goal has been to capture children from around Germany and sacrifice them in a Sabbath ritual that, coupled with Gretel’s blood, will make them immune to fire, the one thing that can kill them.

Things fall into place in the small town of Augsburg where the siblings have been summoned to find the missing children. While the mayor is smart, the sheriff is the stereotypical fists-first narrow-minded sort, expertly played by Peter Stormare.

Renner and Arterton work well together and Wirkola cheats the audience by keeping them apart for long stretches. The heart and soul of the film is their bond and the script gives them too few opportunities to demonstrate that. While we know Renner can handle the action, Arterton is a revelation and she clearly is having a good time, even without her normal accent.

There are witches aplenty and a lonely troll Edward (Derek Mears) who works for the witches until he encounters Gretel. There’s also an annoying proto-fanboy in the form of Ben (Thomas Mann) to help with some of the exposition. The posse also gains the help of another white witch in the form of the redheaded Mina (Pihla Viitala), which sets up the climax which features a visually interesting assortment of witches.

The film features anachronistic dialogue, mannerisms, cultural mores and most blatantly, the weaponry employed by the title characters. They make the film quirky but Wirkola does not do enough with them so things plod along with few surprises and weak dialogue. No wonder the theatrical release clocks in at a brisk 87 minutes. The Blu-ray, though, comes complete with an extended cut, adding ten minutes of promised comedy and mayhem which just makes things a little better, but not enough to change your overall opinion.

The transfer is lovely and looks nice with solid sound. There are just three short extras including a too-brief Reinventing Hansel & Gretel (15:41), which whisks you through the Making Of; The Witching Hours (9:01) with an emphasis on the inventive designs for the evildoers; Meet Edward the Troll (5:25), a look at how Mears and an animatronics team brought the troll to life.