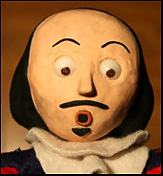 Theme is tied to plot. There are famous speeches and soliloquies in Shakespeare, where the character stops to speak his or her mind, none more famous than the “to Be Or Not Be” speech in Hamlet. The action, however, doesn’t just come to a stop while the player addresses the audience. They always advance the action of the moment, of the play. The action during the “To Be Or Not To Be” soliloquy is found in Hamlet trying to decide if he is going to kill himself because of the grief of his father’s death. It is appropriate for him to ask this question. To translate this to comics or movies – does the explosion advance the plot or is it there just to blow things up? All action sequences, all fight scenes, can be used to advance plot or explore character.

Explore all sides of the question. What did Shakespeare think on any given question? It’s hard to tell because he would give convincing arguments to both (or more) sides of a question. Example: in his play Measure For Measure, set in Vienna, the Duke feels that the city has gotten morally a little out of control. Pretending to leave town, he leaves Angelo – very upright, very moral, very strict – in charge. The Duke, however, disguises himself as a monk to see what happens. Angelo decides to close all the brothels and, under an ancient law, execute those who have gotten a woman pregnant without the bonds of marriage. A young man, Claudio, has fallen afoul of that and Angelo decides to make him an example. Claudio is clapped in jail and sentenced to die.

Claudio’s sister, Isabella, soon to be a nun, comes to plead for her brother. Angelo is taken with her beauty and, filled with desire for her, agrees to exchange Claudio’s life for a one night stand with Isabella. Virtuously, she refuses.

In the dungeon, the Count – disguised as a Monk – counsels Claudio, telling him, “Be absolute for death; either death or life / Shall thereby be the sweeter.” It’s a great speech about the acceptance of death and Claudio seems both comforted and made resolute by it.

Yet, shortly after in the same scene, after Isabella tells Claudio of Angelo’s offer, he begs her to do it. He expresses his fear of death with, “. . . to die, and go we know not where / To lie in cold obstruction and to rot. . .” Which attitude speaks Shakespeare’s true mind?

Both. Both are true, to the moment, to the character, to the author, and for the reader or audience. It comes down to which is truer for us and that was Shakespeare’s intent or what I learned from it. Shakespeare had a many faceted mind and he used it in his work.

Write for the now. In Shakespeare’s day, plays were popular entertainments. Poetry might be gathered in a book but plays were not. Theater was a low art form, just above bear baiting. Shakespeare himself never gathered his plays for publication; that was done after Shakespeare’s death by his friend Ben Jonson, himself a playwright of no small fame or self-esteem who felt that his own plays were worthy of publication and his friend Shakespeare was almost as good and so deserved the same respect.

Shakespeare was writing to please the crowd, but also to note and comment on the issues of the day. Queen Elizabeth I was aging and indeed would die in Shakespeare’s lifetime. Until the very last, she had no heir. Shakespeare’s War of the Roses documented what happened to the nation when King Henry V died without an heir, the wars and cruelties of both sides and that could happen again if no successor was named to Queen Elizabeth’s throne. He also explored what made a good, even great monarch.

As writers, we have to work with the time we have, today, and write things that will resonate with our readers today. Shakespeare did so brilliantly and wound up speaking to people of all time – but he wrote for his own time in a manner that was very entertaining.

That’s what I want to do when I grow up, as I grow up. Be entertaining; touch a chord. These are among the things I’ve taken away from Willie S.