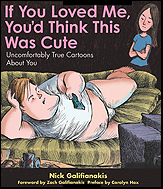 As you may know if you’ve read my column recently (and if you haven’t, what’s wrong with you?? Well, don’t worry – you can always catch up here), I’ve declared it Interview Central, following on my time at Awesome Con DC. There, I interviewed the amazing voice actors Phil LaMarr and Billy West. Both were delightful, so if you haven’t gotten a chance to check out those columns (and/or audio recordings) yet, scoot on over to those links and do so!

While at Awesome Con, I was also happy to be able to catch up with the very talented cartoonist Nick Galifianakis (and to obtain this cartoon for my wall. Hah! I love it!). If you’re not already familiar with Nick’s work, you really should check it out, pronto, because it is wonderful stuff. Both insightful and hilarious, and sometimes hitting uncomfortably close to home, Nick’s relationship-oriented cartoons regularly accompany the nationally syndicated advice column Carolyn Hax, and have been a regular staple of The Washington Post since 1997. Nick has also previously published his work as an editorial cartoonist and illustrator for USA Today, US News & World Report, and various other nationally distributed periodicals.

In 2001, Nick illustrated Carolyn Hax’s book, Tell Me About It: Lying, Sulking, Getting Fat … and 56 Other Things NOT to Do While Looking for Love, and in 2010 he published a collection of his cartoons entitled If You Loved Me, You’d Think This Was Cute: Uncomfortably True Cartoons About You. (FYI, his book is available for purchase on Amazon or you can get a signed copy via Nick’s website. I highly recommend picking it up). In 2006, Nick was nominated for the Reuben Award for Outstanding Cartoonist of the Year in the Newspaper Illustration category, and in 2012, won the Reuben Award for Advertising Illustration.

To me, one thing that makes Nick’s cartoons so wonderful is the way they manage to come across as both very personal and fairly universal at the same time. He also has a unique talent for distilling an entire relationship issue or situation down into one illustrated panel, which hits the reader with all of the impact that most people couldn’t convey in several pages. I find that talent fascinating, and am happy to have had the chance to talk with him about his work and his process, and to be able to share that chat with you here. So read on for more details!

Nick, thank you for doing this interview. Let’s start at the beginning – when did you first get interested in art and/or start drawing?

I started drawing like many other artists – my whole life, I don’t remember not drawing. Any flat surface would do.

And how did you end up doing the style that you do for the relationship cartoons, and do you do other styles as well?

True! You focus a lot on the relationships between people in your cartoons in The Washington Post, which accompany the advice column written by Carolyn Hax. How did that come about?

I was a political cartoonist before that. I started in small papers and then worked my way up to USA Today. And then I actually sort of became bored with political cartoons, for a couple of reasons. One was that when there’s an issue of the day, you know that tomorrow four hundred different cartoonists are all going to gun for that same exact issue. There’s going to be overlap, and there’s something about the lack of uniqueness in the target that bothered me. And also, if you were to look at a political cartoon from the late 1800s, and it’s on, for example, the budget or the economy, it’s going to be quite similar to one of the ones you see today.

So I got bored with that and wanted to try something else. I had always noticed people and their interactions. Always. That dynamic has just always held my attention for some reason. And so when Carolyn created her advice column, the editor, Peggy Hackman, suggested that I do a little icon to go with it – but I wasn’t interested in doing an icon, so I did a whole sort of conceptual cartoon connected to the column, but also one that stood alone. And it satisfied something in me. It seemed to work out as a great partnership – still does, thank goodness. Carolyn is absolutely brilliant; hands-down the best advice columnist – not only out there, but probably ever. She’s been a partner long-term, outside of our marriage and then outside of our divorce. It’s like the institution between us stands alone.

And how does that work, when you’re doing each individual cartoon that goes with a column? Does she send you the column first, or do you sometimes have an idea and she writes about that?

No; she sends me a column, then I read through and I edit the column. And I write a bunch of stuff down, and she incorporates it. And then I do a cartoon to accompany it.

I have to know – as someone who writes relationship cartoons, do your friends always come and ask you for relationship advice?

They don’t do that? Really??

Close friends rarely do; unless things are completely out of whack; then they do. But the people who do ask are friends who are sort of the second circle of friends; or people who you’ve just met who you’ve become friendly with. People that I’ve known since I was seven – they don’t ask me about that stuff. Not unless everything is completely falling apart.

That’s interesting. What is the process when you’re having an idea? Is it ever because you’ve seen something particular?

Well, I am trying to peg it to a column; but I do have feelings about that kind of thing. Feelings about jealousy…or you know, “How do I feel about this particular situation?” – controlling people; really insecure people; people who talk a lot. So I have a response to that kind of thing, and then it’s a matter of, one, noticing it. People say, “Where do you get your ideas?” Well – I get my ideas the same place you get your ideas. It’s just a matter of noticing that it is indeed an idea. And then there’s how you feel about that idea, and you tap into sort of the “honest portal;” and then once you identify how you feel about that thing, how you’re working out feeling about that thing, then the trick becomes how to express that.

At that stage, I choose to do it for an audience of one person. I choose me; because I figured out that by doing it that way, it guarantees that it’s honest, which, in turn, I believe that the authenticity is recognized by many, many people. As opposed to sitting down and saying, “Okay, here’s the idea, how can I make this appeal to a lot of people?” That’s how you create sitcom television.

So the ideas come from what you’re feeling, and you think about how you react to it?

Totally. It’s literally an audience of one.

Sure; all the time. Sure – you know, how people interact; how they hold hands; how they cut each other off; the unrealistic expectations they have of each other. But always it’s how I feel, how I can relate to it. Where am I in the thing – and then that helps me get it across to everybody else.

Ooh – what’s your angle on that one?

I’ve interviewed hundreds of people who are now over the age of ninety, who either witnessed, were around, or actually took part in this particular battle in Greece. So that’s the focus.

Wow, that’s really neat. Are you going to illustrate that too, or will it be just prose?

Well I look forward to that. What’s the “art of” book, can you tell us?

I can’t say yet; but it’s going to be a huge book, with a lot of impact.

Cool! And so people can find out about that from your website?

Yes. Everybody will find out about that there.

Great! Well, thanks, Nick; this has been awesome.

And thanks to everyone who’s been reading these great interviews! Check out Nick’s work on his site or The Washington Post’s site, or in his book, and as always, until next week, Servo Lectio!