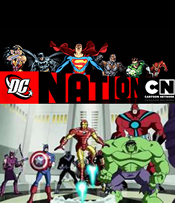 Friends, we are at the dawn of a new and great age. The mighty Marvel Universe and the dynamic DC Nation each will have a block of programming on cable television. On Saturday mornings. Set those DVR’s to stun, kiddos.

Sure, both the House of Mouse and the Brothers of Warner have each ventured into the cartoon cavalcade before, and they were glorious times indeed. As I recall at their heyday, Spider-Man and the X-Men were in full force. Batman’s animated adventures become a power hour with the addition of Superman. And throughout the late 90s and early aughts we’d be privy to all sorts of spin-offs, short lived series, and some toons we may all wish had never seen the light of day. Don’t fret… I’ll have a whole column to dedicate to them soon enough.

The DC Nation block leads off with Green Lantern’s new CG series. Kids ken to the Clone Wars will find fast friends in Kilowog and Hal Jordan as they romp around space helping protect innocents from the wrath of the deadly red lanterns. Following the emerald knights is Young Justice – the continuing tale of a modified DCnU with a team of sidekicks turned proto-titans.

On the Marvel side of the coin, we’ll get the new Ultimate Spider-Man cartoon and the continuing saga of Earth’s Mightiest Heroes with … well… The Avengers: Earth’s Mightiest Heroes. Both blocks will feature fanboy-service by way of interstitial shorts, special segments, and probably a few bonus promotions. DC Nation shows on Cartoon Network, and Marvel Universe will show up on Disney XD. Thus far, DC is ahead of the curve with their block of programming having debuted two weeks ago. Marvel is launching in early April. I can safely report that DC came out of the gate very strong.

I admit I was very nervous about the Green Lantern series when the trailer debuted back in the summer. The Bruce Timm-meets-Clone Wars styling didn’t immediately strike me as being indicative of the quality of previous animated incarnations of DC property. But, like the true emerald enthusiast that I am, I gave the pilot a shot. I was quite impressed. While the character models are a bit too stylized for my personal taste, the writing is high quality. Hal comes across bountifully cocky. Kilowog as the buddy in this buddy-cop-cartoon works surprisingly well. The Red Lanterns are even given a bit of depth out of the gate, quelling most of my fears by the end of the first episode. If there’s any complaint I have thus far, is my fear of the series not exploring the true expanse of cosmic characters. and focusing too much on the Red Lanterns. Simply put, by the end of the season I want Larfleeze, damnit.

Young Justice has been a quietly rising star in DC’s animated belt. The “made cool for the preteen crowd” style keeps me coming back to soak up the fresh redesigns. And their treatment of Aqualad has done more for the character than Geoff Johns did in all of Brightest Day. While their treatment of Conner Kent is a skosh too angsty for my taste… they balance it out superbly with Wally West. The show has taken some time to get its sea legs firmly planted, but a slow burn of serialization paid off at the tail of their first season. Not every story they’ve done has been a complete winner, but the action sequences and cameos from adult league members has always kept things moving. Suffice to say, have it anchor the DC Nation shows their commitment to find new life after the Bruce Timm era-of-awesome.

Over at Marvel, I have to say I’ve never been this excited for a block of their programming. In the mid-nineties, they produced an Iron Man / Fantastic Four block that started strong and staggered stupendously. Their Spider-Man cartoons have always been solid. The X-Men cartoon tackled an amazing amount of comic milestones, but ended sloppily. With their Avengers cartoon though, they have achieved something I honestly did not think I’d see: a comic-inspired take on their quintessential team, done in a manner that is both accessible to new fans and a wink and nudge to their old base. With top-notch voice acting and a fearless plummet into a cadre of villains, the series has been nothing short of brilliant. Every team member has been given time to shine. Suffice to say it not only tows the line for Mickey… it makes me forgive them for releasing the Avengers cartoon from 1999. Wait. Scratch that. Nothing will make me forgive them for that. Seriously? Ant-Man as team leader!? But I digress…

Last, but not least, is ole’ Web Head. Ultimate Spider-Man appears to take its cue from the Brian Michael Bendis penned series, with a bit of a comedic bend to it. With a supporting “and his amazing friends” cast including Nova, Power Man, Iron Fist, and White Tiger… who among serious comic fans are salivating just a little bit? I suggest you check out the trailer, and get ready for the return to quality toonage from our pals over on the Disney float.

So as I’d said before… make sure to have those DVR’s at the ready. And for all you evil pirates, make sure the Torrent Bay is loaded. It’s a good day to be a comic book fan, cartoon lovers… Hop aboard the bandwagon before it takes off without you.