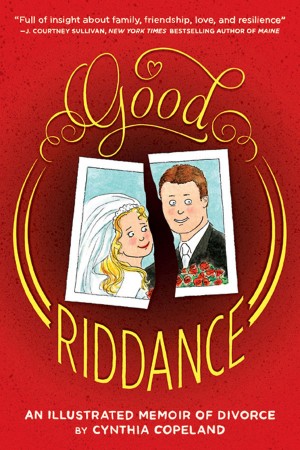 For years, Cynthia Copeland has been mining her personal experiences to produce books about families and things families can do together. As a result, she has been recommended by Oprah and others and has carved out a nice little career with her prose and illustrations. She brings a friendly, kind sense of humor to her work making these great to read books. Now, though, she brings her personal experiences to a new work that is intimate and clear-eyed.

Subtitled An Illustrated Memoir of Divorce, Copeland traces her marriage and divorce from TJ while raising a family in New Hampshire. In 2001, Copeland discovered her husband had been having an affair and was in a loveless marriage after eighteen years. Looking back, she realized she thought the younger TJ was exotic and interesting, insecure about her own qualities so latched on to him for fear of never finding the right guy.

TJ, though, is far from ideal. He’s not exactly ambitious and seems to coast through life, perfectly content with a level of thriftiness most of us would call cheap. He’s an attentive father to their three children but avoids the hard issues, including how to discuss the end of the marriage and dissolution of the family. She insists he leaves so he goes to live in his office rather than spring for rent. In time, though, he gets a place of his own and Copeland begins to fret the kids will love it with their devil-may-care dad more than being at home with the “rules”.

The novel follows that first year and is nicely broken into seasonal chapters which include a pause for how the family reacts to the horrors of 9/11. But life goes on and the separation becomes formal and the kids don’t abandon her. Instead, she works on her books, works out and gets into great shape, and relies on her network of female friends for the emotional support not forthcoming from her parents. TJ, meantime, meanders from woman to woman, never exactly growing up but never shirking his responsibilities to the kids, who periodically have to force him to pay attention.

Copeland finally samples the dating pool with the usually expected humorous results and even tries to reconnect with a high school friend only to learn that you really shouldn’t try to go home again. Instead, she eventually finds a second family with Will, and his three sons. The final section of the book all-too-briefly deals with the whirlwind marriage and blending of families that culminates with his insisting they sell her home where he would never feel like he belonged. Instead, they buy land and build a place the new couple can truly call their own.

The book nicely traces the fears, joys, pain, and sorrow that comes with divorce and massive, rapid changes to one’s life. The artwork is clear and simple, conveying emotion with just a few lines. She mixes word balloons and captions well, ensuring each page is clear to read. Copeland produces the work in two color, choosing an appropriate shade of blue to represent the emotional state was she in during this period of her life.

For whatever reason, some of the best graphic material released these days is in the form of memoir as we discover people’s real lives can at times be far more interesting to read about than the hyper-fantasies that have crowded the shelves. Works such as Copeland’s deserve your attention even if you aren’t married or divorced, because the human experience can be entertaining and moving.