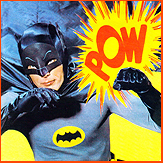 I’ve written a lot about comics these – holy septuagenarian! – past 47 or so years, but I’ve never before used the faux sound effects lead that appears above. So. okay, why now?

I’ve always assumed and will continue to assume until the universe corrects me, that the aforementioned lead, perpetrated by a legion of journalists ever since comics have come to the attention of the multitudes, was inspired by the Batman television show that was aired on ABC from 1966 to 1968. Clever, y’know. Catchy. The video folk, in turn, got the faux onomatopoeia from old comic books; the stunt was, they superimposed these sound effects, lettered in garish display fonts, over fight scenes. The overarching agenda was to spoof Batman comics, particularly the Batman comics of the previous decade, by juggling contexts and emphasizing the goofy.

Batman as self-satirizing comedian? Okay by me.

But this form of comedy was much of a particular time and place, a brief, shimmering few years when the nation was in an experimental and iconoclastic mood. The mood changed – don’t they always, darn ‘em! – and after three seasons, Batman-the-television-star left the airwaves, and Batman-the-comedian joined the ranks of the unresurrected.

I’ll testify that comedian Batman deserves a place in the Batman pantheon and I’m sure that the show has its partisans, maybe fierce partisans. But is the world clamoring for a return of this odd form of humor? As I suggested a paragraph ago, it was unique to time/place Or so I’ve been believing.

People at DC Comics apparently believe I’m wrong. Our friends at the Comic Book Resources website inform us that “DC Comics will expand its digital-first comics line this summer with the debut of Batman 66, a series based on the classic television series.”

A number of ways this could go. Try to recreate the spoofy sensibility of the original. Do the comic as a period piece. Play Batman as a comedian using contemporary humor. Structure the stories as the old tv episodes were structured, with a cliff hanger half way through the story. Or do self-contained stories, the kind that were a staple of the old comics. Or do open-ended serials. Preserve the cast of the original. Recast with Batman’s current supporting characters. Mix and match all the preceding or – astonish and delight me with something I haven’t thought of.

I can’t help wondering how this project originated. From whence came the idea – editorial department or marketing department? Or some department in California? Not that it makes a lot of difference; there’s no mandated origin site for good stuff. But if there’s a reason to be skeptical, it might be that folk who can get projects going remember the joy that got from some entertainment when they were children and believe that the entertainment was supplying the job and not their own curiosity and innocence and, further, that they can recreate what they liked and, further still, that today’s audience will respond to the same kind of entertainment.

Let’s open our minds and see what happens.

Note: Thanks to Darren Vincenzo for alerting me to this column’s subject.