(Why, yes, there ARE spoilers in this story – how smart of you to figure that out.)

Dan Slott has done a very good job of driving comics fandom crazy with his latest story in Superior Spider-Man.  To explain (no, there is no time…let me sum up) Doctor Octopus transferred his mind into the body of Peter Parker, and let his old body die, with Parker’s mind within.

And for the past few weeks, has been doing a BETTER job at being Spider-Man than Peter.  He’s catching more criminals, the Mayor (J. Jonah Jameson himself) loves the new take-no-guff attitude, and he’s the darling of the media.

You see, an echo of Peter has been bouncing around new-Spidey’s head, trying to keep Octavius from getting out of control.  And Otto has figured that out, and sets out to eliminate the rogue consciousness from his mind.

And in the latest issue, for the second time in a year, Otto Octavius beats Spider-Man, decisively and completely. He successfully purges the nosey Parker from his mind at the end of an emotional mental battle.

There’s a LOT of detail in the battle that might pass people by.  For example, Peter builds a mental version of New York City as a battleground, but everything’s misspelled, as a dyslexic might see it.  This is because the mental peter has been hiding in a part of Ock‘s brain that can’t access the language center.  Also, as Peter’s memories are slowly erased from Ock’s brain, He forgets his own name, thinking it’s Peter Palmer, a reference to a classic blunder in an early issue where Stan Lee misremembered the character’s name.

So that’s it then – Peter Parker is dead and gone, no traces of him remain, and Ock’s in charge of his body now and forevermore.

Dan may have teased things just a shade too much in the panels reproduced here.  First off, he shows off the golden otcobot that he originally used to transfer his mind into Peter’s body, and Peter attempted vice-versa.  Says right there – a full copy of Peter’s memories.

And then he tells the Living Brain (another spectacular grab from the past by Slott)  to destroy it.  But almost immediately afterwards, he calls the robot to help tie his arms down as Peter attempts to seize control of the body.

So LB doesn’t have time to destroy the octobot. 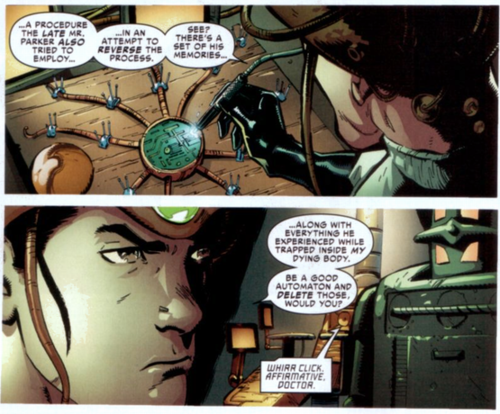 More correctly, it’ll almost certainly be the way to re-imprint the memories onto his mind, and provide the path for whatever the current Marvel Universe description of the soul is.

Dan’s already sowing seeds that will bring the downfall of Octo-Spidey.  How long he’ll let them grow is anybody’s guess, but this is clearly a long-term plotline, and rightly so.  This has been before, and been resolved in in a single issue, but played right (and it is, I assure you), this may end up with people hoping that Otto could STAY Spider-Man somehow.  He’s already shown growth as a person, and realized that there are more altruistic reasons to be a hero than merely to prove you can do it better.

We all know how this ‘ll end, but the road to that end is where the entertainment lay.

I’m not too sure.