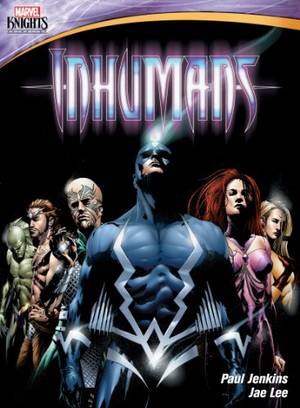 The Inhumans were one of the last great creations by Stan Lee and Jack Kirby. Beginning with Medusa, introduced in Fantastic Four #36 in 1965, the full complement showed up nine months later. They were another branch of humanity, although it was a long time before readers learned the full story, especially as succeeding writers found new ways to tie them in to the evolving Marvel Universe cosmology. They were a fascinating, colorful bunch but each time they received their own series, it never quite caught on. Still, that hasn’t stopped people from trying, including Paul Jenkins who brought a radical approach to the race for the fourth attempt in 2003. His twelve issue maxiseries was drawn by Jae Lee, propelling him into the spotlight.

Jenkins focused on what the societal structure of Attilan, must be like. We knew previously of Black Bolt and the royal family, but we also came to know that there is a subservient class of Alpha Primitives. The maxiseries contrasts relations between the Inhumans and the mutants along with the Inhumans and the world governments. To tell the story, he focused on a group of teens as they undergo Terrigenesis, a rite of passage that exposes each to the Terrigan Mists, which unlocks their special genetic heritage.

Stirring the unrest among the Primitives is one young Inhuman, an outcast from their society. Stirring unrest among the governments is the king’s insane brother Maximus the Mad. And yes, there’s an insidious connection between the two. Various governments covet the high tech prowess possessed by the Inhumans while Black Bolt just wants to live apart from humanity. Geopolitics, fueled by family infighting, ignites and propels the story.

This was adapted into a series of motion comics shorts that ran online a while back and has been collected onto DVD by Shout! Factory. As with the other motion comics, the process is a modern day version of the 1960s Marvel cartoons with the artwork lifted from the comics and limited animation added. Jae Lee’s artwork does not lend itself well to the process and the modifications to his work by others are evident.

Jenkins’ story, already episodic, breaks into neat chapters and flows nicely. He clearly has his favorites such as Karnak the Shatterer, and doesn’t know what to do with others such as Triton and Crystal. In the center remains the mute Black Bolt, long-suffering sovereign of a people that cannot find lasting peace. He also gives new characters to embrace such as Tonaja, one of the newest Inhumans and Rexel Toiven, who considers himself an outcast and decides to take his problems to the world governments in the name of his king. Of course, the humans fight back and Attilan is brought to the brink of a global war. With Maximus stirring up the Primitives, Black Bolt has his gloved hands full.

As befit Marvel Knights at the time, this is a darker take on the Marvel Universe and their allegorical themes. In this case, the Inhumans stand in for the standard fear of mutants but there are several other themes Jenkins explores and does well, although the comic actually does a better job with this aspect.

I wish I could explain it, but as usual, the vocal talent here is lackluster although better than most of the other motion comics from Marvel. Brian Drummond’s Maximus gets an A.

Shout! merely collects the chapters without editing them into a seamless movie so you get each installment’s recap and by the midpoint it feels very repetitious. The 132 minute running time could have been streamlined and the story made stronger in the process.

Unlike some of the other DVDs in the series, this one comes with A Look Back At The Inhumans with fresh interviews from Jenkins and then-Marvel Knights chief  and now Chief Creative officer Joe Quesada. Jenkins does a nice job talking about the motivations for the project, his thoughts on the Inhumans as characters in the Marvel Universe, and writing the maxiseries. Quesada is a bit more generic and rah rah.