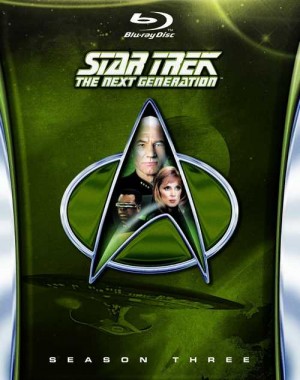 I find myself writing about Star Trek: The Next Generation Season Three more than any single season of any season from any franchise. And that’s fine by me given the quantum leap in quality improvement from the previous two seasons. I am happy to do it one more time as the Blu-ray set from Paramount Home Entertainment is due to arrive on Tuesday.

The behind-the-scenes turmoil that led to the first two seasons feeling incredibly inconsistent began to fade with the arrival of a new set of writers and producers. As Gene Roddenberry grew frailer and ceded more day-to-day control to producer Rick Berman, the show also bid farewell to the exhausted head writer Maurice Hurley. He was briefly replaced by Michael Wagner but illness forced him to leave after just four episodes, but his recommended replacement, Michael Piller, proved to be the turning point in the show’s fortunes. As Berman focused on the physical aspects, Piller took control of the writing staff, incorporating input from the actors, especially Patrick Stewart who not only wanted to see Picard off the Bridge more often, but running, shooting, fighting, and kissing babes.

The cast had also been complaining about the physical discomfort caused by the spandex uniforms. They were retooled by newly arrived costumer Bob Blackman, made looser with the addition of the high collar, but complaints continued so during the season, the regulars received near wool gabardine outfits with the men welcoming the jackets while the women continued to wear one-piece outfits. 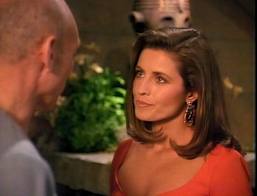 The most significant alteration to the writing staff was most likely the arrival of Ronald D. Moore, who submitted “The Bonding” as a spec script and was promptly hired on staff. His familiarity with the original series helped him tremendously and he also quickly grew to be the writer to focus most on the Klingon culture, which resulted in significant developments for Worf and the Federation’s allies.

The show’s evolution went beyond stronger scripts as the series truly lightened up with the elevation of Marvin V. Rush to cinematographer. The change meant the show went for brighter and bolder colors, establishing a look for the remainder of the series.

Another significant addition was actually the return of Gates McFadden as Beverly Crusher. Other character alterations saw Crusher’s son Wesley receive a field promotion to ensign while Geordi La Forge was promoted from lieutenant to lt. commander and Worf advanced from lieutenant J.G. to full lieutenant – none of which required walking the plank. 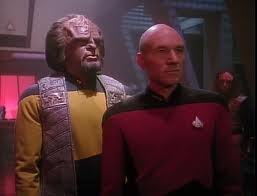 All told, the changes on camera and behind it meant the show was maturing and fast. We got a greater sense of the cosmic politics through shows like “The Defector” and “Sins of the Father”. More character-centric shows allowed different members of the ensemble to shine, notably Brent Spiner in “The Offspring” and Dorn in “Sins” and “The Bonding”. It should be noted that the dictate against continuing story threads from episode to episode began to erode during this season, freeing the writers to more deeply explore the characters the repercussions of their actions.

Jonathan Frakes began his directing career this season with the moving Data tale “The Offspring”, making an impact away from Riker, a character that may have experienced the least challenge this season. 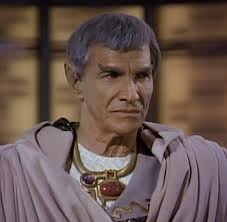 The ensemble was augmented with many returning guest stars led by the delightful John DeLancie and Majel Barrett We also welcomed back old friends in the moving “Yesterday’s Enterprise” and Mark Lenard’s turn as “Sarek”. New additions to the canon included Reg Barclay (Dwight Schultz), who became a favorite and was brought back in subsequent seasons. Whoopi Goldberg made scant appearances as Guinan and Colm Meany continued to man the transporters as O’Brien (who didn’t get a first name yet).

The third season’s most significant impact, perhaps, is the final episode, the series’ first cliffhanger and a ratcheting up of the threat level. The Borg, introduced a season earlier with a warning from Q, finally arrived and wanted to add mankind to their diversity.  Seeing Picard assimilated as Locutus followed by Riker’s order to fire phasers meant fans had a very long summer of anticipation ahead of them. It was the first time a threat was introduced with lasting repercussions unlike the thread introduced at the end of season one.

One of the greatest challenges with these releases is convincing audiences that already own them on VHS or DVD that the high definition restoration is worth the bucks. In the case of ST:TNG, it is definitely worth it as the special effects are sharper and the overall look of the series is brighter, clearer, and crisper. Then there are the bonus features. All the previous extras are back as standard definition “archival” pieces but the new ones also make a compelling argument for purchase. 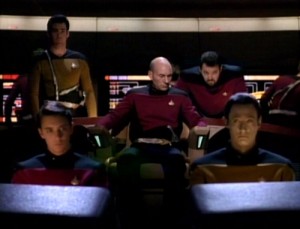 For 1:15, you can be enthralled with Inside The Writer’s Room, hosted Seth MacFarlane as he chats with Ronald Moore, Brannon Braga, Naren Shankar and Rene Echevarria. It’s late in the program before you get a sense of the mechanics of the Writer’s Room but before then you watch the four reminisce and remind one another of inspiration from desperation and cringe-worthy episodes that haunt them still. It’s a little too loose as they talk over one another and don’t always answer their host’s questions, but MacFarlane demonstrates an impressive memory for episode titles.

For 90 minutes or so, there is the three-part Resistance is Futile – Assimilating Star Trek: The Next Generation, which carefully explores the show from both before and behind the camera. Wagner’s role is totally missing but Ira Steven Behr steals the documentary with his anecdotes and casual approach to the history compared with some of the reverential views. It’s interesting to hear the crew talk about them noticing the improvement in the stories and the effect Piller had on one and all.

There is a very moving Tribute to Michael Piller where his widow and coworkers all discussed what made him a special person and just what the series needed at right that moment. On more than one occasion it is noted that Piller thought he was leaving the series after one season and was leaving the cliffhanger resolution to “Best of Both Worlds” to his successors, until Roddenberry himself asked Piller to stay on for one more season. It may well be the last great act the producer did on behalf of his creation.