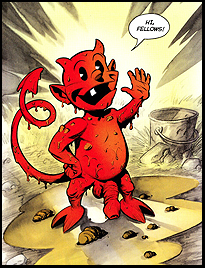 One of the charms of being into comics is the joy of stumbling across an unexpected find. It could be a new comic that came in under the radar (in other words, I missed that page in the Diamond Catalog) or an oldie I hadn’t heard of. That used to be one of the real pleasures in attending comic book conventions, before they became the Cattle Calls of the Damned.

Yesterday I stumbled across a real interesting find. An emailed gift from a friend in need, and by “in need” I’m referring to me. I was staring at my blank computer screen, reciting the mantra “need… column… idea… need… column… idea…” The gift was a wonderful albeit sickening one-shot published by Dark Horse about five years ago, produced by Eric Powell of Goon fame.

Did I mention this book isn’t for kiddies? Of course if you’re a parent that’s your decision; I ain’t trying to tell you how to raise your children up. But even Powell is on the same page: the false-cover consists of a blurb that says, and I quote,

Yow! Talk about your variant covers!

This book is hilarious. Pull the stick outta your ass – Satan probably put it there anyhow – and give it a read. I suggest doing so after an episode of Justified.

THURSDAY: Bring it on, Dennis O’Neil!