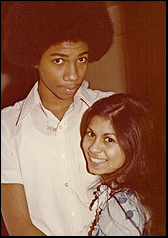 That list goes on but A&D also produced many others of note in various areas such as fashion and music: Calvin Klein and Tony Bennett are A&D alumni along with a myriad of badass mofos. I’ve written about A&D before as it certainly has played an important part in the comics industry and has for many decades.

A&D is the backdrop for this piece, but that’s pretty much the extent of the industry tie in. This piece is about a love story and A&D is the only way I can justify it appearing here. I beg your indulgence, but I think this is a love story that deserves to be told to as many romantics as possible and the comic book and pop culture world is nothing if not a group of romantics.

We are a group of romantics. Consider the following from my comic book journey… I shed a tear over Gwen Stacy’s death. I felt a real sense of tragedy when Jean Gray killed millions as Dark Phoenix. I felt horrible for Matt Murdock when he found out the love of his life was a drug addict and a whore. Comics are full of stories that bring out the romantic in all our little geek hearts.

This story happens to be true. This is the story of A&D students Frank & Debbie.

I know I’m pushing it but I humbly beg your forgiveness as I compose this as if I’ve written it for Frank and Debbie alone.

I’ll understand if you skipped this article and instead went back to playing Injustice. If I were you I’d skip it… but I’m an asshole.

“Fine Tall Guy With The Kissable Lips and that Mack smile?” Debbie you said that was your first impression of Frank when you saw him on the A&D escalators?

That fine tall guy with the kissable lips was I Debbie. Frank was the guy behind me asking for a breath mint, a pick (white people ask somebody) and a clue when he saw you.

You just think you met him on the escalator as I wiped your mind clean of the first meeting with my powers. Hello!! Master Of The Universe here! Your first meeting actually happened when Frank was coming out of the 7th floor bathroom.

Remember the 7th floor bathroom and the assemblage that used it?

I was covering for him (long story he was drunk) when he lost his mind and saw you.

It’s well known that ever since A&D I’ve been the crazy one of our tight knit group but I will digress for a rare moment and speak from the heart.

I remember ALL my A&D girlfriends.  Pretty Jackie Brown (way before the movie) Carol Rivera (oh my god she was fine) Lynn Jacobs (she was in the 9th grade I was in the 11th…yeahhhh jail bait) and for about 3 days Althea Hill (she was a stone cold fox but a bit eccentric. How so? I found out we were no longer an item when she decided to get mad at me for dating Jackie…the year before.)

Jackie broke up with me.

Carole broke up with me.

Althea broke up with me

Tony Tutt pointed out to me that dating a 9th grader was just stupid. I should have noticed that when I’d call Lynn at home and her mother would pick up the extension and tell Lynn it was bedtime. I decided to take Tutt’s advice and break up with Lynn but before I could…

Lynn broke up with me.

BTW, Lynn lead me to believe she was in the 11th grade when I first met her… lying little bitch.

Frank not only did you keep Debbie as your girlfriend from the moment you two were an item in high school but you married her after high school and she is still your wife and the love of your life. Debbie, those ‘break ups’ you were refer too?

Frank, I remember you telling Tony & I (who was my best fucking friend in A&D and beyond until we lost touch) that you guys had broken up.  He and I just gave you a “yeah right” look.

The only people who thought you guys ever broke up were you two. Those ‘break ups’ were always about a day. If the break up went a week it was because school was closed for Christmas break. If it went 2 days it was a weekend, etc. You get the drift.

But I digress; Frank you were able to keep Debbie and every single girl I dated in High School woke up one day and said, “Michael Davis?? What the fuck and I thinking?”

I was a bit envious of that. But I also loved you guys like family so I was happy for you. Although I will never ever forgive Frank for bragging about having his girlfriend with him on the senior weekend trip to the dude ranch. All the other guys in our group spent two days trying to get a girlfriend…for the weekend.

Anyway-you guys are the real deal. A real love story. To this day I can’t think of you guys as individuals I have to think of you as Frank and Debbie.

I would not be surprised if you looked up soul mate in the dictionary there would be a picture of Frank & Debbie.

Lastly, to the girls who dumped me in high school.

I’ve done all right for myself, all right as in I have a Ph.D., homes on both coasts, I’ve written books, created TV shows, I lecture all over the world, have a motherfucking school auditorium named after me and none of that is even the most impressive things I’ve accomplished.

OK, OK, I can’t hide my feelings by bragging about things that in a moment I’d give up for any one of you. Carole, take me back. Jackie I still love you, Althea forgive me.

Lynn…bitch you lied to me you get no love!!!!

But I can be reached at motu@michaeldavisworld.com if you want to chat.