Michael Davis: DC Is Coming Out 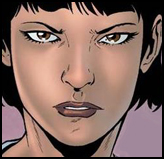 But will Orson Scott Card still stand by DC?

Wait for it… Bisexual!!

Alysia Yeoh is her name (I think she’s Asian and if so…hot!) is the roommate of Batgirl!

Man, I’d love to write that book but the odds of me writing anything for DC are about as good as Obama getting an A rating from the NRA.

Wait. That’s not true. I almost forgot I wrote a piece for the Static Shock Dwayne McDuffie tribute issue. That’s a good a sign as any that someday I’ll work on another DC Comics project. Hell, that’s not a good sign, that’s a great sign.

On the other hand, they still haven’t paid me for that piece… which could be considered a sign also.

But I digress (sorry Peter hope you are doing well my friend). Orson Scott Card may not even care that Batgirl, an iconic major character in the DC Universe is shacking up with an bisexual transgender hot Asian woman.

Someday soon a reporter, journalist, creator or fan will ask Card in a public forum for his reaction to the bisexual transgender hot Asian woman living with Batgirl and when they do I hope Card responds and doesn’t dodge the question.

Will he stand by his homophobic hateful views and then have to answer what will surly be a follow up question along these line “Will you continue to work for the company that considers this type of lifestyle, which you abhor, a legitimate one?”

That is the rock and hard place that Card will find himself between. Hope for his sake neither rock or hard place are names of guys but just a metaphor.