The New Who review – “Cold War” 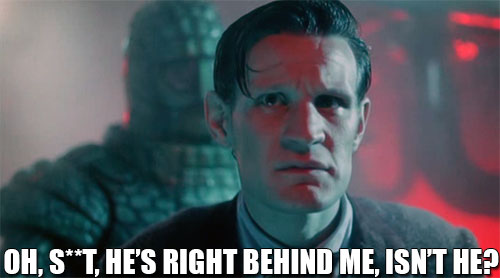 You’d think we’d have learned as a people – if you find a large humanoid form frozen in the ice, don’t thaw it out.  And really don’t thaw it out if you’re cut off from humanity, like in an arctic research base, or as in this episode, a sinking Soviet Russian submarine.  With The Doctor being mistaken for a spy, and an ancient Martian conqueror trying to blow up the world, things were set for an unpleasant interpretation of the term…

A Russian submarine unearths an Ice Warrior, frozen in the permafrost of the North Pole.  The Doctor arrives (aiming for Las Vegas) and attempts to broker a peace between the already very skittish Russian crew and a warrior who presumes that his people are dead, and that he has nothing to lose.

Gatiss pulls off a great version of the traditional “trapped with a monster” story, wit well-timed scares, the one guy who thinks he can side with the monster, and a smattering of 80s dance tunes.  Tense, exciting, and an ending that is rather a surprise.  The direction is dead-on for such a film – snatches of images only, never a shot of the full beast, cause there’s no need.

David Warner (Professor Grisenko) is Evil.  Or was, anywway, in the classic Time Bandits.  His career in and out of the genre is considerable – he played Jack the Ripper in another time-travel classic, Time After Time, voiced The Lobe in Freakazoid! (not to mention Ras Al Ghul on Batman the Animated Series) and played Sark in Tron.  His history with Doctor is equally deep. He was in fact offered the role of The Doctor in 1974, but turned it down.  Since then he’s appeared in a number of audio adventures, provided a voice in the Dreamland mini-series, and played The Doctor, albeit an alternate one in Big Finish’s Unbound series.

Liam Cunningham (Captain Zhukov) is currently fighting the winter in Game of Thrones as Ser Davos Seaworth. Like warner, he was almost The Doctor – he was in the running for the role in the 1996 TV movie, eventually played by Paul McGann.  He also appeared in the Titanic mini-series that brought us our first look at Jenna.

Tobias Menzies (Lieutenant Stepashin)  will also be appearing in GoT later this season. He also appeared in ROME as Marcus Brutus.

Mark Gatiss (writer) has been lobbying to bring back the Ice Warriors for some years, and Moffat finally relented.  He’s been busy co-writing and creating the new Sherlock series, as well as appearing in the recent series of Being Human.  He’s also written An Adventure in Time and Space, the anniversary story of the creation of the series, due to be broadcast near the time of the anniversary. 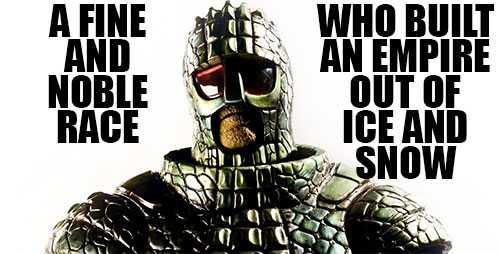 THE MONSTER FILES – The Ice Warriors first appeared in an eponymous tale during the Troughton era with a number of parallels to this story, in that both feature a frozen member of the Martian race thawed out in haste.  In the original adventure, the Ice Warrior Varga was played by Bernard Bresslaw, a regular castmember of the “Carry On” films.  He was 6’7″ in stocking feet, and was usually paired with the diminutive Charles Hawtry, letting the difference in size provide much of the comedy.  They reappeared shortly after in The Seeds of Death, mainly as a way of justifying the expensive costumes.  They reappeared in the Pertwee years in the two Peladon stories. By this time, the former Martians had renounced their warlike ways.  The tenth Doctor alluded to them in The Waters of Mars, theorizing in a cut scene that they may have discovered The Flood and froze it in the glacier, abandoning the planet in reponse, recognizing their threat.

Like so many classic series villains, they’ve appeared in many stories in novels and audio plays which served to greatly expand their history. The rank of Grand Marshall and some of the details of the caste system first appeared in the novel Legacy So far, little of the information we’ve seen in those expended adventured have been much used in the series, but contrariwise, little of it’s been expressly discounted either.

A MODEL THE SIZE OF A QUARTER…AN EXCELLENT DECEPTION – This is one of the first times in years where the special effects on the series were done as model work and not CGI.  The Russian submarine was a huge model filled in a miasma of smoke standing in for water.

…AND AGARN’S WEARING A DRESS – I don’t know if there’s a name for it, but I am a complete sucker for the gag where a character makes a suggestion to do something, and another character is all “No, NO way, NOT happening, UH-uh”, and in the next shot, there’s the first character doing their suggestion.  It was described perfectly in this scene from Freakazoid!

“Am I speaking Russian?” The TARDIS translates languages for its inhabitants, except of course, when it’s dramatically or comedically expedient not to, like in last week’s episode.

“This wasn’t a test” – Except when it is, of course.  The Doctor placed Victorian Clara in a position of danger in The Snowmen, and when she asked “Is this s test?”, he told her it was.  Remember rule one – The Doctor lies.

“Jaw jaw, not War War” The Doctor is paraphrasing Winston Churchill, who we learned in Victory of the Daleks is a great friend of The Doctor.

“I reset the HADS” – The Hostile Action Displacement System is a defense mechanism on the TARDIS, last seen in another Troughton episode, The Krotons.  When attacked by a threat of sufficient force, the ship dematerializes, removing itself from danger.  It’s supposed to rematerialize a short distance and time from its departure point, but as is traditional, things on the TARDIS don’t always go smoothly.  It’s a perfect way to get the TARDIS out of the way and force The Doctor to think on his feet, and more inventive (not to mention obscure) that simply having it break down.

Another theme has arisen between this episode and the last – Song. Skaldak talks about “singing the songs of the Old Times” with his daughter.  It’s how The Doctor describes the call the Ice Warrior uses to summon his suit. It’s an odd choice of words, so I must assume it’s deliberate

NEXT TIME ON DOCTOR WHO – Hide.  The title, and very good advice.  Next Saturday.