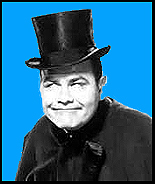 I was something of an odd kid growing up so it may have made sense that I liked odd comedians. My memory was that I was the only person in our household who liked Ernie Kovacs; I must have been about 7 or 8 when his TV show was on. I thought he was funny and just so damn strange.

The same must be said as well for Jonathan Winters who died Thursday at the age of 87. A remarkable improviser, he could become anyone or anything. Hand him a prop or a hat and he could do four or five characters one after the other, morphing from one to the next in a heartbeat. Famously, Jack Paar just gave him a stick and Winters turned in character after character , including a terrific imitation of Bing Crosby.

I have a memory of Winters on The Jack Parr Show simply taking it over. Parr couldn’t get him to shut up or get off the stage. Parr was one of many many comedians or entertainers who were huge Winters’ fans. Robin Williams really owes his career to him. He pops in on this interview that 60 Minutes did with Winters and it’s fun not only to see the two riffing together but also for some of the serious insights that Winters gave on comedy and being a comedian.

What may be interesting to ComicMix readers is that he studied cartooning at Dayton Art Institute, meeting Eileen Schauder who would become his wife. Makes sense to me; his act often had him becoming a living cartoon.

He was also upfront about his stays in a private psychiatric hospital for manic depression which was brave and may have cost him. You could dismiss his act as that of someone too wired and a bit crazy instead of as the comedic genius it was.

There’s so many ways you may have encountered Jonathan Winters. He was an actor as well as a comedian. One of my favorite films that he made was The Russians Are Coming, the Russians Are Coming playing as police deputy that may have been related to Barney Fife. More manic but not more competent. He was also one of the few things that was watchable in the comedic gang bang, It’s a Mad Mad Mad Mad World. He was the white suited garbage man on Heft commercials who had a refined accent and pronounced  garbage as “gahrbaj” – which I still use myself on occasion.

Winters, being a cartoon himself, also voiced cartoons, voicing Grandpa Smurf. Among the others were Tiny Toons Adventures (where he once voiced Superman!) and Fish Police – based on the comic book – doing Mayor Cod.

One of the most surreal (and with Jonathan Winters, that’s saying a lot) series of appearances was on Mork and Mindy where Winters was the son to Robin William’s Mork. As you may recall, Mork was an alien and his race aged backwards. It gave Williams a chance to work with his idol. It must have been easy to script; just point the two of them in a general direction and turn them loose.

One of Winters’ best known characters was Maudie Frickert who looked a bit like Whistler’s Mother and talked like Mae West. Maudie appeared everywhere, on all the variety shows, on the Tonight Show (Johnny Carson’s Aunt Blabby was, shall we say, a “direct descendent” of Maudie), and any place on TV that you can think. She had a career of her own. Maudie was just one of several recurring characters that Winters created.

When Jonathan Winters died this last week, all those characters, all those voices, died with him. They still live on videos and I encourage you to check YouTube and other places on the webby-web for them. He was an original, an antic mind, and with his death the world is a little less funny at a time when we need a few more real laughs.