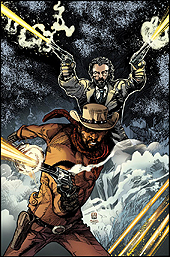 Set immediately after the events detailed in the movie, Django Unchained The Animated Series will focus on the Reconstruction Era events that led up to his becoming the first black state senator in Mississippi. Like the movie, the emphasis will be placed upon the action elements, although the sons of Django and Broomhilda will play a major role in the plot.

Reginald Hudlin, director of such movies and teevee shows as Psych, The Office, The Bernie Mac Show, Everybody Hates Chris, House Party and – my favorite – Cosmic Slop, was a producer of Quentin Tarantino’s Django Unchained. He also wrote the DC Comics adaptation of the movie, where his friend and collaborator Denys Cowan provided covers. Previously, Cowan and Hudlin worked together on the Black Panther and Boondocks animated series as well as on Marvel Comics’ Captain America/Black Panther: Flags of Our Fathers series. His numerous comics credits include Black Panther and Spider-Man.

Cowan is best known for his work as an artist on such series as Batman, The Question, Steel, Deathlok, Firestorm, Dominique Laveau: Voodoo Child, Hardware and Moon Knight.

It is anticipated that Jamie Foxx and Kerry Washington will not be involved in this new series, although Samuel L. Jackson is likely to voice both of their children. Christoph Waltz, whose character King Schultz was (SPOILER ALERT) killed off in the movie, will be reprising his role as the pissed-off Jesus.

Cyndi Lauper has been signed to write and perform the theme.