Martha Thomases: Getting The Chair 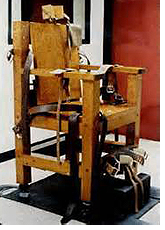 Although my cable company provides me with hundreds of channels, there are still occasional day parts during which it is impossible to see an episode of Law & Order. Even if I broaden my parameters to include the one with the sex and the one with better writing, there are precious moments when neither Tamara Tunie nor Leslie Hendrix is being a tough-talking, no-nonsense medical examiner.

It’s not that I think it’s a great show, although I do kind of like it. I think Vincent D’Onofrio is brilliant, and not only because he did both this and this. I like the fact that someone who played a murderer in an early episode can be a criminal, or even an assistant district attorney in a later episode. I like seeing almost every working actor in New York get at least a few minutes of screen time… and a paycheck.

The original show (which I’ve heard is referred to as “The Mothership”) was originally formatted quite strictly. At the time, the syndication business favored half-hour programs, so the idea was to run the series on broadcast as an hour-long drama, and syndicate it as two half-hours – Law and Order. I’ve never heard of that happening. All the re-runs I watch last the full hour.

And they all follow a fairly predictable pattern. There’s a murder, and the police first identify a suspect, who turns out to be a false start. Then they find the real killer and arrest him/her. After that, the lawyers take over. In addition to the murder, the suspect probably has another ax to grind. Maybe this person is a rabid environmentalist, or anti-abortion, or can’t get the affection of mommy or daddy. There is angst. Deals are offered. Deals are rejected. The trial takes place. Usually, the prosecution wins. When they don’t, it’s clear the jury was bamboozled.

All is right with the world.

The two spin-offs don’t separate the cops from the lawyers with quite the same egalitarian rigidity. In fact, both concentrate more on the police, to the point that there are hardly any lawyers at all in CI. This is fine by me.

The sexual politics of these shows are terrible. The male lawyers do all the work. With the exception of Kathryn Erbe and Mariska Hargity, the lead cops are men. (Sidenote: Kathryn Erbe’s partnership with D’Onofrio might be the most feminist ideal on all of television.)

I like to have the shows on while I work. It’s a way to tell time without looking at a clock. It’s entertaining if I pay attention, but not so distracting that it interrupts a run of productivity.

It would be a service to freelance writers everywhere is there was a cable station exclusively devoted to the various shows. Combined, they’ve been on the air for about 40 seasons, more than enough to fill a schedule. They could add in tie-ins, like Homicide: Life on the Streets (a much better show) and Oz, which both share a few cast members and a co-creator.

The biggest problem will be that the demographics are probably too old to attract quality advertising, and ads for catheters supplies are disgusting.

Which brings me to comics.

I love the comics I read as a kid. I even love the comics I read in the 1980s. There are comics I enjoy today, but I rarely have that sense of discovery and wonder I had back then. But I don’t really expect to be knocked out in the same way. I’m older. I’ve seen those tricks before. It’s difficult to invent something I haven’t already seen.

Some friends lament the fact that today’s titles aren’t like the older stuff with which we fell in love. And I get it. I’d like to be young again, too. I’d like to be a desirable demographic.

But I can reread the comics of my youth any time I want, and I do.

Please don’t put these ads in my comics.