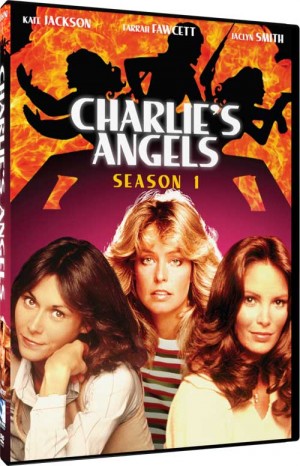 Women’s Lib was perhaps the last great social movement of the 20th Century, a logical outgrowth of a changing society that finally brought equal rights to African-Americans and saw the last wave of Baby Boomers create an identity all their own. Women spoke up, beginning in the 1960s with Betty Freidan’s The Feminist Mystique, coupled with the arrival of birth control pills. By the end of the 1960s, women were increasing playing larger roles in the workplace, mirrored soon thereafter on television. They were competent at work and at home, able to stand on their own without benefit of a man. While CBS quailed at the notion that Mary Richards was happily divorced, they were fine to let her be a successful producer on The Mary Tyler Moore Show, a series that ushered in a new era for powerful women. 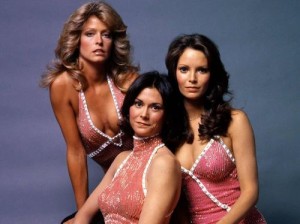 Dramatic prime time series followed suit, most notably with Angie Dickinson’s Police Woman. It was a no-brainer than to imagine that if one powerful woman would work, more would work better. Fred Silverman, then head of programming at ABC, commissioned Aaron Spelling to create a show about three tough but beautiful women. The successful producer conceived of three women working as private investigators for a mysterious employer in a series to be called The Alley Cats. ABC and Spelling first contacted Kate Jackson, who previously appeared on the network’s The Rookies to be a lead. She refused to audition, was cast anyway, then suggested Angles instead of Alley Cats and so Charlie’s Angels was born. 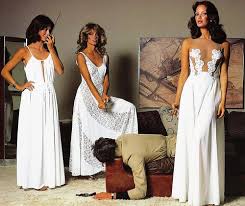 Today, the show is seen as the beginning of a trend of dumbing down prime time programing, ushering in “jiggle television” that emphasized their breasts over their brains. It’s also the launching pad for the pop culture phenom known as Farrah Fawcett-Majors, whose hair started a trend all its own and her bathing suit poster, with a hint of nipple protruding, made her the decade’s superstar. Initially, though, the series was merely an attempt to entertain at the 8 p.m. hour, appealing to all ages with some action some adventure, and three beautiful women to while away sixty minutes with. 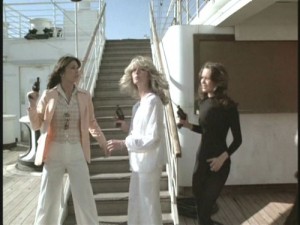 It was never meant to be great television or even trend-setting television but it lucked out and became a ratings hit that transformed the cast, anchored by Jackson, but also featuring Fawdfcett0-Majors and model turned actress Jaclyn Smith into celebrities. Mill Creek Entertainment has been vacuuming up rights to some of the most important series across the decades and releasing them in affordable, no-frills season sets including the just out Charlie’s Angels Season 1. Just listening to the music and watching the title credits with those three silhouettes shows how often imitated became, even today.

John Forsythe got pressed into services to voice the never seen Charlie while their onsite handler John Bosley (David Doyle) is there to look serious and congratulate the girls on a job well done.

Spelling’s series rarely allowed his characters depth and this show is no exception despite the pedigree of the writing staff including john D.F. Black. Much of the tone was established by Spelling veteran Edward J. Lakso who wrote seven that season. Directors who helped clinch the look and feel include George McCowan (3) and Georg Stanford Brown (2), Bill Bixby, and Cliff Bole. 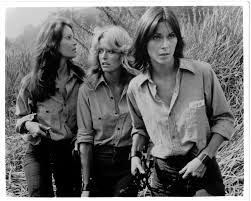 The first season (September 22, 1976 to May 4, 1977) has fairly routine plots including the obligatory “Angels in Chains” that not only put the Angels in a women’s jail, but wisely used the great Mary Woronov as the warden and a young Kim Basinger as a fellow inmate. Other noteworthy guest turns include Rene Auberjonois, Fernando Lamas, Ida Lupino, Frank Gorshin, Tom Selleck, and Tommy Lee Jones.

All 23 episodes are included here in standard definition DVD on four discs without any of the extras that appeared on previous collections.