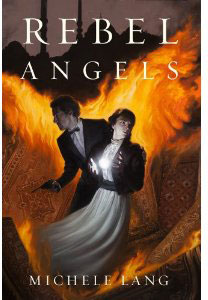 The Lady Lazarus saga’s final chapter for the tale that is, of the three, the most human: Rebel Angels (Tor Books, Hardcover, $26.99, March, 2013). It’s October, 1939 and our heroine Magda is saying goodbye to her little sister Gisele, sending her off with spymaster Knox to be protected by Churchill in the UK whilst Magda and her fallen angel-man Raziel sallie forth to Baku, Afghanistan to find a way to bring down the Asmodel-possessed Hitler and prevent the wholesale slaughter of millions that Gisele has foreseen. To do this, Magda seeks the primordial magic even more potent than the Book of Raziel, the Lazarus women’s legacy—the Heaven Sapphire. And the last time it was used, all Hell broke loose. The gem is its own creature, not to be summoned by mere words, not even by a Lazarus, the ancient line of witches who can come back from the dead via a deal with the Witch of Ein Dor of the Bible. Everyone is after it and she has to get there first, no matter the cost. And so she has to announce to Vampire Count Gabor Bathory that she is quitting his employ and leaving Budapest once again to try to stop this war—and get his blessing on her clandestine marriage to the man who’d given up Heaven to be with her.  What does Bathory do?  The only thing a Vampire Count can do for the closest thing he has to a daughter in the face of war—he allows her to escape by throwing the most lavish vampire party ever and invites all magicals, under a truce, to celebrate with him! Even her beloved Eva, now in deep-cover as the SS Werewolf leader Szalasi’s paramour, attends. All the players are on stage for the grand finale in contexts at once perplexing, astonishing, and satisfying.

And that’s what makes this work, even when I can barely suspend disbelief – as with the literal flying carpets of the women of Helena. The human merchant Ziyad is just that in his air of passion in the real sense of the word—to suffer as a mensch, an Aristotelian man, and not merely a human animal. The over-arching emotions and dilemmas in this climax are elevated to what is best and worst in humans, so that infernal and divine are one and meet—as above, so below, the divine reaching down toward humanity and humanity reaching up toward the divine, by either good or evil means, by true hearts of compassion or bloated egos. And the means makes all the difference, so that evil might not triumph over the face of God’s creation, via the human spirit in all of them, even the once-divine. This concluding chapter is not so much an ethical book (that was more for book II), but a passionate one, one that faces despair head-on and says, like Gandalf to the Balrog, “You shall not pass!”

Lang’s prose here is her most calculated—book I is still the book of my heart. But she pulls off things here that made me doubt and yet made them somehow plausible. She’s honest enough that not all of your favourites will survive, but none will be forgotten, and thus stays true to the Jewish concept of yizkor that propels this story: remember so that none truly die forever. There are awww moments that remind you that Lang is also a romance writer, without sending you for the insulin shots.  She does not flinch from torturing her characters—see the dungeons of the Baku Institute where the mad scientist Prof. Roskonikoff conducts operations that resemble crude, early frontal lobotomies. This is not a book to be handed to young women without adult supervision. Finally, I will say that, in the end, somehow, a spark of love triumphs and there is, indeed, life out of death.  And you can’t help but love that and smile.