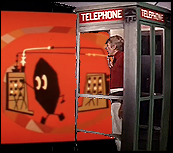 Yesterday morning I received an e-mail from my pal/ComicMix partner/Secret Santa Glenn Hauman with a link to a three-month old piece in The Atlantic  and the comment “You simply must write this up!”

Must? Glenn never says must. He knows I’ll twist and turn any demand challenge into the pretzel from hell – you know, it’s a living – so he usually makes polite suggestions.

I was thinking about writing in detail about exactly how to fix the comic book industry and how easy it is and how it won’t take any additional money to pull it off, but evidently Glenn thinks this is more important. So be it.

I believe the brilliant political satire The President’s Analyst (James Coburn, Godfrey Cambridge, and Wasteland contributor Severn Darden) to be even more relevant today than it was when it was released in 1967. I don’t want to do any spoilers but if you haven’t seen this movie, do so. Yeah, it’s got some hippie stuff. You can deal with that. But the ending of the movie, where the happy Doctor Doom of the piece, Pat Harrington Jr., explains his evil scheme is far more believable today.

For the past 46 years I have been proselytizing this nefarious scheme shall come to pass, and now, according to The Atlantic, it has. That’s because they know what magnetic resonance imaging neurofeedback is. I didn’t, and now that I’ve read up on it my brain hurts real bad. The funny thing is, if this magnetic resonance imaging neurofeedback thing works you might not have to do the heavy reading.

“Simply” put, magnetic resonance imaging neurofeedback allows you to learn how to do visual stuff by having the information zapped directly into your brain. Boston University in Boston and ATR Computational Neuroscience Laboratories in Japan figured it out. I won’t explain the process – I can’t explain the process, at least not until I undergo it and I doubt it’s covered in my über-lame health insurance plan.

I find myself in metaphor hell. I don’t know whether to allude to The Matrix or to The Manchurian Candidate. Both, probably.

Here’s the scary part. This procedure has most effective when applied to subjects who don’t know in advance what they’re supposed to be learning. Think about that for a minute. If somebody wanted you to, say, murder somebody and they chose you because of your access to that person, if you actually knew about this in advance your moral predilections might get in the way. Well, they might.

Of course, all of this is still in the experimental phase.

At least, that’s what they want you to think.