REVIEW: How to Fake a Moon Landing

How to Fake a Moon Landing
By Darryl Cunningham
176 pages, Abrams ComicArts, $16.95 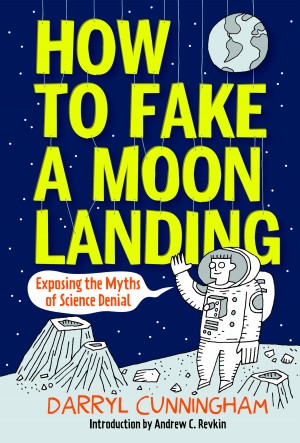 There has been a preponderance of memoirs as graphic novels filling bookshelves over the last few years but with the exception of Joe Sacco’s work, there has been precious little journalism done in the graphic form. Cartoonist Darryl Cunningham, therefore, is a welcome voice, shedding some much needed light on the darker areas of science and culture. He made his name with Psychiatric Tales and then turned his attentions to Science Tales; Lies, Hoaxes, and Scams, which was released in England. Since then, he added a chapter and this month Abrams’ ComicArts imprint releases it as How to Fake a Moon Landing.

Cunningham breezily takes us through some of the hot button topics that are used as bludgeons by No Nothing Conservatives or are blown out of proportion by a lazy media. As one expects, the Moon landing is just the beginning, with chapters also dedicated to the MMR Vaccination Scandal, Evolution, Global Warming and so on. Each chapter spells out the facts, sourcing them along the way, and then shows where fact goes off the rails and becomes fodder for others to misuse. While he takes the cranks and critics to task, he also often faults the news media for never digging deep enough or presenting the other side of the argument for a “fair and balanced” look at the issue.

In a sprawling interview with Tom Spurgeon in 2011, he explained, “The comic strip format is particularly good at presenting information in a concise and entertaining way. A comic strip is so easy to read, that you can often find that by the time you’ve decided not to read it, you’ve read half of it. It’s a very immediate format that engages straight away and can deliver a lot of information quickly. It’s the perfect medium for presenting complex information. I’m surprised it’s not done more often. I’ve never thought of myself as part of any social activist tradition. These social and political subjects have naturally evolved out of my own interests, and to some extent, my frustration and anger with the status quo.”

As a result, you might be surprised to learn that the MMR matter was the result of one doctor’s efforts to sell his own medicine or how much money the oil industry spent on lobbying; resulting in Vice President Dick Cheney ensuring a particular bill was effectively neutered. As usual, the common man is left to pay the price or suffer the consequences. Since its initial publication, Cunningham dropped “Electroconvulsive Therapy”, replacing it with “Fracking” which remains a current topic of debate. As a result, the book is exceedingly relevant as it digests the issues down into comprehensible chapters, pointing where you can look next for more detail.

Cunningham’s approach is pretty similar to how Scott McCloud educates us about graphic storytelling and it works. He infuses each chapter with black, white, and one other color, keeping things stark and letting the reader focus on the facts. On the other hand, those who automatically buy into conspiracy theories or refuse to allow facts into the discussion will dismiss the book which is a shame. Wisely, he closes the book with a prophetic chapter on “Science Denial”. Cunningham does a remarkable job with difficult material and for high school students, just opening their eyes to the world around them, this is a terrific primer.