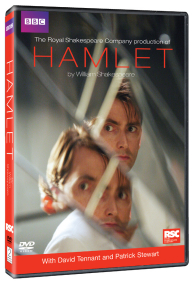 For geeks like us here at ComicMix, a real-life mash-up can be too good to be true. So, the notion of Captain Jean-Luc Picard sharing the same stage as The Doctor is just too good to be true, even if it means watching yet another production of William Shakespeare’s Hamlet

What many forget, though, is that Stewart is a classically trained actor so this is like mother’s milk to Sir Patrick. Tennant is also an accomplished performer and Shakespeare veteran who most certainly has greater range than what we’ve been familiar with these last five years (I strongly recommend you all go find [[[Einstein and Edington]]] to see what I mean).

When the two genre icons appeared on stage in London, it stirred up quite a buzz. Better yet, it was recorded and broadcast just last week on PBS’ [[[Great Performances]]].

Recognizing the new era we consume entertainment in, PBS immediately made the full show available on their website and this week, BBC Entertainment released the event on standard DVD and Blu-Ray.

I’ll confess: I am not a fan of the Bard’s tragedies, having more to do with the format and its requirements that everyone dies unhappily at the end, requiring things to happen that make little sense. Anyway, this rendition by the Royal Shakespeare Company cleverly transports the setting from 17th Century Denmark to the 21st Century with Tennant as Hamlet and Stewart as Claudius.

As directed for the screen, the three hour production is visually arresting with lots of interesting angles as selected by director Gregory Doran.

Tennant has been singled out for his interpretation of the great Danish prince, with some critics hailing this as the performance of a generation. I’ll leave that to the experts, but it was certainly engaging, making me forget all about the Time Lord, despite his loopy ploy. In jeans and mostly bare feet, he looks more slacker than royalty. 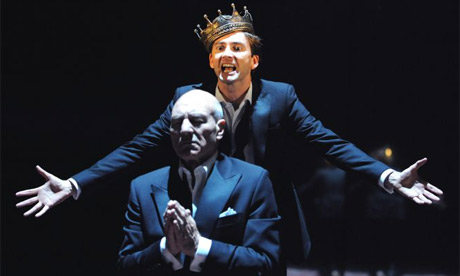 Stewart more than holds his own as the newly appointed King, who quickly marries Queen Gertrude (Penny Downie) while Hamlet is away from court. His sterling work was recognized with the Olivier Award, the British equivalent of the Tony Award.

Interestingly, Stewart played Claudius before, three decades earlier in a different television production, but is continually drawn to the character. “Claudius is a great role because it is a depiction of a gifted, intelligent, bold man destined to be a great ruler who missed out and, as a result of missing out, chose a wicked option to achieve the life he wanted,” Stewart told the press. Strutting around the nourish sets in expensive dark suits, he is every bit the master of his domain.

There are some nice extras including a 40-minute featurette on adapting the stage show for the screen. You can also gain additional insights from the audio commentary anchored by Doran along with Director of Photography Chris Seagar and producer Sebastian Grant.

If it takes a starship captain and a Time Lord to get you to watch this, so be it, but you won’t be disappointed.