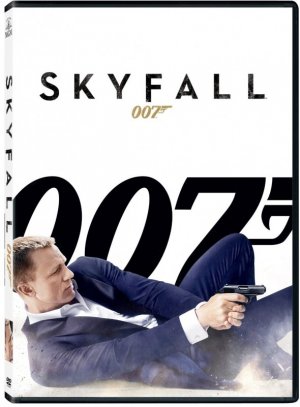 Skyfall, now out on home video from MGM, is a sheer delight, holding my attention for the entire 2:23 running time, long for a Bond film but it felt just right. The four year financially-mandated layoff between the so-so Quantum of Solace and Skyfall is barely noticeable but the passage of time is an unspoken theme for the new entry.

Daniel Craig, not at all what Ian Fleming had in mind for 007, made the character his own through sheer force of will. When he helped reboot the series with Casino Royale, my biggest complaint was that he was too old to be an MI6 agent at the beginning of his career. With Quantum a direct sequel, we were still seemingly early in Bond’s career but I bought into it.

Now, suddenly, the third film deals with Bond being ready to be retired. We’ve clearly leaped ahead in this incarnation’s timeline, having totally gained M’s confidence to the point where she risks her career and reputation on him when England needs him most. But this is a wounded Bond, one who has been beaten down, who escaped death and seemed to have walked away from his responsibilities, swapping his Walther for a bottle and obscurity. Of course, when M and his fellow agents are threatened in the most heinous of terrorist acts, he has to come back.

We’ve seen Mi6 agents go rogue before, most recently when 007 exposed the perfidy of 009 in one of the Pierce Brosnan entries. But, this is the first time we’ve seen a truly frightening threat make it so personal. Javier Bardem steals the film with his turn as Raoul Silva, an agent M seemingly abandoned when she was the Hong Kong station chief back in the 1980s. His torture left him physically and mentally broken and now he is back to exact the most painful revenge possible.

After he makes M watch MI6 HQ blowup, Bond is back and unleashed after Silva but, being a wily opponent, it’s all part of a master plan. Not only will he beat M, he will make her suffer by breaking her current favorite, Bond. And here is my only quibble with the generally excellent script from Neal Purvis, Robert Wade, and John Logan (this almost makes me forgive him for Nemesis). Silva’s plan is so intricate that it is entirely reliant on split-second timing and not once does he miss a beat, making him too perfect. When our hero needs that same timing for success, it is sometimes hit, sometimes missed but Silva never seems to miss a beat, straining credulity.

After two films to restage the early days, this film nicely allows itself to be a formulaic Bond adventure starting with a breathtaking (and plausible) motorcycle chase across the rooftops of Turkey. The film opens with two musical notes that immediately suck you into the Bond experience and they hint at the Monty Norman theme until it’s time for Bond to be Bond, James Bond. The audience applauded at the sight of the Astin Martin and the film’s best line may be M’s, “Go ahead and eject me. See if I care.” The movie comes complete with a visually fun title sequence, owing plenty of Maurice Binder’s work, and ends with the traditional status quo re-established, but freshened for the future. We have Q (Ben Wishlaw), Moneypenny (Naomie Harris), and a new M (Ralph Fiennes). Then we get Craig in the gun’s sight, the blood and the Norman theme in full throttle. Bond is back and we’re promised will return.

It’s a thrilling adventure that critics say owes too much to the Bourne films but really, it’s the other way around. The Bond films have been setting the bar higher and higher through the years, challenging others to match or exceed the standard for adventure films. Thankfully, Barbara Broccoli and Michael G. Wilson, caretakers of the franchise, are now willing to work with a variety of screenwriters and directors to keep things fresh. I had no idea Sam Mendes had a flair for action and he was most impressive so it was inspired of a drunken Craig to offer the job to him and then tell the producers what he had done. They get credit for not dismissing the notion.  And with that, I get the sense that the franchise is in good hands and with Craig aboard for one or two more, the second half-century seems to be promising. 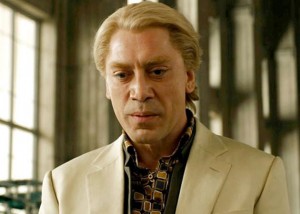 The transfer to Blu-ray is sharp, with great color and sound. Cinematographer Roger Deakins’ work is nothing short of spectacular and the digital photography is well captured here for repeat viewings. The sound equally matches the visuals, well mixed and lush.

The armload of extras begins with Commentary with Director Sam Mendes where the director takes us through the scenes and discusses them in-depth. It’s interesting to hear how the actors helped shape his thinking and shooting so we can follow the evolution from concept to final shot. We’re reminded that Star Trek Nemesis director Stuart Baird is a terrific film editor as seen here. There’s additional Commentary with Producers Barbara Broccoli and Michael G. Wilson and Production Designer Dennis Gassner but they fawn too much and you learn too little.

Shooting Bond (59:24) can be seen in chapters or as a complete documentary and you can watch the film get made from every major aspect save Baird’s editing. The cats contributes to this so it’s fairly comprehensive and entertaining.

Skyfall Premiere (4:28) offers up snippets from the world premiere at the Royal Albert Hall, featuring interviews with Mendes, Craig, Harris, Bardem, and Fiennes. You also get the

Theatrical Trailer, Soundtrack Promotional Spot, and fifteen minutes of trailers for other films.