Airship 27 Productions announces the release of their second title for 2013, GHOST BOY. 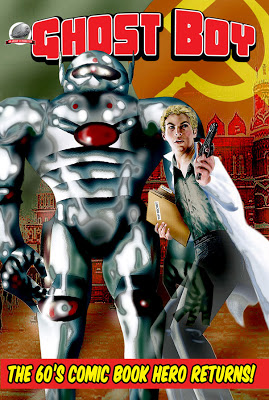 The during the 1960s America was locked in a tense Cold War with the Soviet Union, Ian Fleming’s James Bond unleashed a spy craze and the Beatles swept across American shores with their version of new pop-rock and roll.  Meanwhile American comics had entered into the Silver Age with the birth of Marvel Comics.  Every week new titles seem to proliferate drug store magazine racks.
Now Airship 27 Productions has dug deep into those long forgotten comic vaults to revive Jigsaw Comics’ odd-ball hero, GHOST BOY.  Created in 1964 by writer Art Croxton and artist Ric Sippo, the short lived series starred young Alex Conroy as the top agent of S.O.S (Science Operational Security) who is possessed with strange superhuman abilities. His best friend was an eight foot robot called P.O.P.S (Photoelectric Optimal Protection Sentry).
Writers Terry Alexander, Micah Harris and Andrew Salmon recapture the fun and magic of this 60s forgotten character and offer up four brand new adventures. As an extra bonus, Ron Fortier and artist Gary Kato recreate the origin tale of GHOST BOY in a special 9 pg strip which kicks off this thrilling collection all gathered under a gorgeous cover by Laura Givens.
Comics fans rejoice, GHOST BOY is back!
“Actually he never left,” explains Airship 27 Productions’ Managing Editor Ron Fortier with a mischievous grin in his eyes.  “That’s because there never was such a title and this particular project is in reality our homage to those wonky Silver Age comics we all grew up loving.”  Fortier goes on to explain the idea came about when the company looked into adapting an authentic 60s comic series only to discover the property was still under license.  “That’s when we collectively had this idea to make-up our own comic hero from that decade and see if could recapture the odd-ball exuberant charm those books contained.  We will let our readers judge if we’ve succeeded or not.”
AIRSHIP 27 PRODUCTIONS – PULP FICTION FOR A NEW GENERATION!
Available now at Create Space –
(https://www.createspace.com/4176057)
As a PDF download from our website for only $3.
(http://robmdavis.com/Airship27Hangar/index.airshipHangar.html#ghostboy)
Within another week on Amazon proper and Kindle.
And within two weeks at (www.IndyPlanet.com)
Share