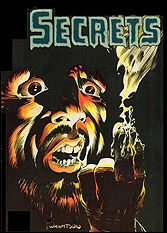 Everyone has secrets. The thing is, secrets want to be told. The level of intimacy we have with another person is reflected by the number of secrets we share with them.

There are many different levels of secrets. Some would seem mundane – your name, for example. Unless you’re wearing a name tag, a stranger won’t know it. You have to choose to share it and there are occasions when you wouldn’t or would only give your first name or maybe even a name that isn’t your own. In the latest Star Trek film, Uhura doesn’t give James T. Kirk her full name. In the same movie, a young and defiant James Tiberius Kirk gives a police officer (policebot?) his full name. Both are choices that say something of the character.

There are other levels of secrets, some mundane, some deeper. Boy meets girl. Boy wants girl’s phone number (or vice versa). At the moment the question is asked, the answer is a secret. A decision is made to share it or not. I have known many ladies not always eager to share that phone number with me and some with whom I did not want to share mine. Sometimes you can tell crazy pretty quick.

In writing, secrets can be powerful tools for creating and understanding a character. There are all kinds of secrets, great and small, that will help you define the character for yourself and your readers.

Secrets can also define the plot. Who does a character choose to tell what secret and when? Most important, was it as good idea? We have all chosen to share something with someone and it turned out to be a bad idea. If that’s true for you, it’s true for your character. Ever hear something that you labeled TMI – Too Much Information? The character being told the secret may have the same reaction. How do you feel when you’ve told a secret and turned out to be TMI for the person hearing it? Awkward? Embarrassed? Or were you oblivious to it?

The reverse can be true as well. Should a secret have been told at a given moment and wasn’t? What effect does that have on the characters and the plot? What opportunities may have been missed? We all know moments like that in our own lives; what is true for us should also be true for our characters.

Why was the secret told or not told? Why was that moment chosen to tell or not tell? What was the character trying to get or achieve by telling it? Why did they not choose to tell a secret at the right moment? Fear? Fear of what? These all define a character.

Was telling the secret to a given person/character a good idea? Again, think of your own life. Did you ever share something with someone and later wished you hadn’t? When reading a story or watching a movie or TV show or a play, did you even hear a character tell a secret to another character and wince, knowing it was a bad idea even if the character didn’t yet know it?

There’s also telling someone else’s secret. Sometimes it’s a betrayal; sometimes it’s necessity. Which is it and, again, why did the character choose to share that secret at that moment and with whom? Why would you?

In writing, in life, secrets tell us a lot about someone. Knowing them is powerful. We never, however, can or should know all the secrets of a person or a character. As writer, I often know more about the character than I share with a reader. There should always be a bit of mystery, a secret not yet shared hiding within us, within the character.

It comes down to trust. You have to trust in order to share. Sometimes that trust is misplaced and sometimes it’s not. All that drives story – our own or in the stories we create.