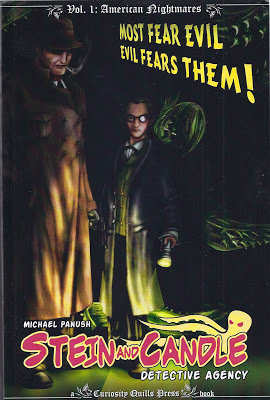 One of the finest pulp novels we enjoyed last year was Michael Panush’ “Dinosaur Jazz.” In fact this reviewer nominated it as Best Pulp Novel in 2012 for both the Pulp Factory Awards and the Pulp Ark Awards.  Yes, it is that good and if you haven’t read it yet you should certainly go out and do so immediately.
Of course having discovered Panush’s marvelous fiction, we went hunting up some of his earlier works.  We found two volumes of stories starring a duo of occultdetectives operating in the years after World War Two known as Stein and Candle.  We’ve just finished reading the first collection and are thrilled to report Micael Panush is by no means a one-trick literary magician.  “Stein and Candle” features seven hair-raising, fast paced, pulp tales of the most unusual and original new occult heroes ever invented.
Mort Candle was an army sergeant with the 101stAirborne during the war and is one tough as nails character.  During the last days of the European campaign, he and his squad were sent on a mission to rescue a Jewish family, the Steins, being held captive in their Austrian castle by a group of sadistic Nazis SS unit.  Count Wolfgang Stein was a scientist who dabbled in arcane lore and the Germans wanted him to create a zombie army with which to stem the tide of the war and save the Third Reich.  When Stein refused, he and his wife Hannah, during a daring escape attempt, were killed and only theiryoung eight year old son, Weatherby survived to be rescued by Sgt. Candle and his team.
This volume opens six years later as we learn Candle, now a civilian private investigator, has become the fourteen year old Weatherby’s legal guardian.  Together they take on weird cases tainted by the occult.  These pit them against all manner of horrific adversaries such as vampire bikers, a deadly ghost haunting a British movie company and a zombie plague in a Los Vegas like city in the California desert.  Each case is narrated by Candle in his rough, non-frills voice, and is a thrill ride this reviewer relished to the max.  Whereas the volume contains only one story presented in the third person style and it is the actual origin story of the young occultist, Weatherby Stein.  It is a most moving story and Panush deserves much credit for holding back towards the end of the volume.
Bottom line, dear readers, if you like hard-edged fantasy that combines both horror and pulp action, “Stein and Candle” is the book for you.  Panush continues to whip up fresh new ideas coupled with truly great characters establishing him as one of the best new writers in the New Pulp arena.  We fully expect his name and award titles are going to be synonymous all too soon.
Tags
Michael Panush, Curiosity Quills Press, Occult Detective, Pulp Fiction, Action, Adventure, Ron Fortier, Pulp Fiction Reviews
Share