The other week on my podcast 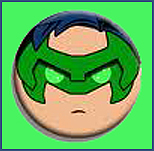 (to which you’re all listening, right? Right?) I lamented on a bold move I’d have to make after reading the incredibly terrible “Rise of the Third Army” event in the Green Lantern comics. I decided after following the book for nearly 15 years I would drop it. And I placed the blame squarely on Geoff Johns’ mighty shoulders. As if the lords of comic bookery heard my cry of exhaustion… Johns announced his stepping down from his emerald perch. And I looked up into the sky, and swear I saw a hawk wink at me.

And while I could spend the entirety of this column discussing why Geoff Johns’ name no longer comes with the reverence and respect it once did from me, I choose to digress to a more optimistic topic. With Johns and his entire GL crew stepping away, it will soon be time for new creative teams to grab the reigns of DC’s biggest B-lister and his C and D-list cohorts. And with that comes major cosmic boots to fill. Consider this my open letter to those new teams: reportedly, Peter Tomasi on the lead Green Lantern title, Joshua Hale Fialkov on Green Lantern Corps and Red Lanterns, possibly Robert Venditti or Justin Jordan on New Guardians, and Keith Giffen on Threshold. Please note: I write on Tuesdays for my column on Saturday, but all of this unsolicited advice still applies to those who actually land the jobs.

Before you new people even open up a blank word document to scribble down thoughts and ideas, go pick up Mark Waid’s Daredevil run over at Marvel. Now read it. Now read it again. Waid, in his own right, may be one of the most prolific and amazing writers in contemporary comicsdom. I asked that you pick up his DD run not only because it’s amazing but because it followed Brian Michael Bendis’ run, which lasted about a decade if I’m not mistaken. Waid proved that even with that much narrative weight attached to a character, he could find a fresh perspective and new legs. And he did it in spades.

Now that you’ve seen that it can be done, it’s time for you to do it yourself. Realize above all else that the issues and events before your run must inspire you, not weigh you down. Bendis drug Matt Murdoch to hell several times over. Waid took that and found a way to flip it. So too, will you have to do the same with the entirety of DC’s cosmic comics. But to be fair? If nothing else, Geoff Johns built you an entire universe to play in.

Over nine years Johns took a single Green Lantern – Kyle Rayner – forgot him, and in his place built an entire emotional spectrum of warring aliens. He reignited the Green Lantern Corps. He created depth with villains (who have since had a slight change of heart) like Sinestro and Atrocitus. He created mystery with Larfleeze, and the Indigo Tribe. He created the Blue Lanterns, who up ‘til this point were essentially hero support from D&D. He granted Krona his own epic end. He retconned in an entirely new origin for the Guardians. He even made another new Earth Lantern (who I’ll mention is totally not a terrorist). It’s easy to see how anyone walking into all of this might be overwrought by this newfound continuity. Where does one even begin?

If it’s not already clear to you: consider working a year (or more, Rao willing) without an event. Is it even possible? I beg of you to look to the past. Comics, albeit serialized soaps for teens and wish-they-were-still-teens, were born in an era where complete thoughts could be told in a single floppy issue. And while I’ve explored both the good and the bad of today’s modern “write for the trade” era writing styles, suffice to say after nine years of nothing but event-driven drama for my favorite sect of mainstream comic books? My white flag has been flying since the new 52 graced my longboxes.

At the core of every great run on comic books these days, comes a commonality of concept. I cite Grant Morrison or Scott Snyder’s runs on Batman, Jonathan Hickman’s run on Fantastic Four and FF, Bendis’ run on Ultimate Spider-Man, or Matt Fraction’s run on Invincible Iron Man or his current run on Hawkeye. With each of these books (and a few other fine examples I’m missing), the creators all present a singular vision of the hero and their world. They start from a seed, and grow their own microverses within their respective issues. And in each of these cases, they take into account the continuity that occurred before them, but choose to move past it. Our past informs who we are, but it doesn’t need to be what keeps up from moving forward. So too, are our heroes of pulp and paper.

A lesser set of writers would take the last scenes of however Johns and company ends their books and emulate where they thought they were going. But you, new creative teams… will do better. You will find the essence of your respective lanterns, and will build your own bold direction. You will celebrate nine years of new ideas with years of your own. You will refrain from creating more secrets hidden in lost continuity. You will refrain from crossing over the books because one of you had a great idea that needs everyone else in the pool. You will find ways to use heroes and villains that already exist, or create new ones that help elevate your stories. You will not feel the need to end every major arc with Hal (or John, or Guy, or Kyle, or Not Terrorist) reciting the oath and blasting something to oblivion. You will not give Kyle Rayner another new costume. You will not make John Stewart blow up another planet. You will not play emotional footsie between Hal and Carol.

You will go boldly where no one has gone before. And if you’re worth your salt, you’ll earn my subscription back.