From the 86th Floor: Reviews by Barry Reese 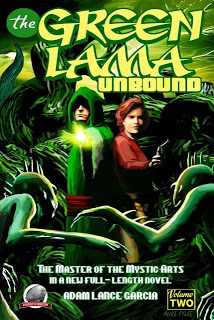 For much of the past year, I’ve had one person after another tell me that I should read this book. I resisted because nothing turns me off more than unceasing hype. Hell, I still haven’t seen Titanic for just that reason. That and the fact that the history books ruined the ending for me. The ship sinks, right?

Anyway, I finally broke down and purchased this book not long ago. It is a high-priced item, costing a little more than I usually like to plunk down for a paperback book, but the production values are typical Airship 27: which means the paper is high quality, the cover is engaging and the formatting is professional. So you could definitely argue that you got your money’s worth.

Now… about the story itself.

Let me start by saying that I don’t think this book is particularly revolutionary but it is a damned good read, especially for someone’s first novel.

Basically, Adam takes a mostly B-Level character and molds him into something more. Hell, the Green Lama is pitted against the hordes of the C’thulhu Mythos in this one! And Adam displays a deft hand at balancing action with characterization.

I particularly liked the supporting characters in this one: Caraway, Jean and Ken all stole quite a few scenes from the emerald-wearing hero. In fact, I’d say that the way they orbited the hero was quite well done and pretty classic, in my opinion. Even in the old Doc Savage series, Doc was pretty staid compared to the bickering of Monk and Ham.

There are several Easter eggs in the story that made me smile, especially the reference to the rampaging ape in the early chapters. It shows that Adam has a clear grasp on the audience who will be reading this.

If I had a complaint — and it’s a minor one — I think that Adam overdoes it a little on the Lama-speak and the C’thulhu words. Throw in all the German and Greek phrases, too, and I felt like I was skimming an awful lot. I’d tone that down somewhat in future volumes. I mean, we get it — that guy’s German. This guy likes to say “Ma-ni pad me” a lot. Too much of that stuff breaks up the narrative flow, in my opinion.

This book is a terrific, fast-paced read that features believable characters that you grow to care about. It’s a wonderful introduction to The Green Lama and definitely positions Adam Garcia as a leading voice in the New Pulp movement.