Michael Davis: It Was Twenty Years Ago Today 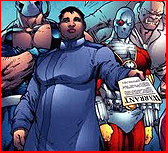 Actually it was twenty years ago, but it wasn’t today. Look, any time I get to use a Beatles lyric in anything I write I’m using it. Nothing says witty and clever like a Beatles lyric or a Tupac and Biggie reference.

Case in point. One time too freakin’ many an ex-girlfriend asked me in an email if I thought she was getting fat. I was so sick of answering the same freakin’ question over and over again. She would ask when she and I would be on a date, in a car, on the phone, texting and one time I could have sworn she screamed it out during sex. I can’t be sure of that I couldn’t hear her clearly as I was, at the same time, screaming out my name. Yes, I scream my own name out during sex. Someone has to.

I was just sick to death of this shit so in my response I found a way to use a slightly altered Beatles lyric, which was, yes, you are the Walrus.

Hard to believe I was just five when I helped start the company, eh Jean?

Twenty years later, Milestone is still considered the greatest publishing achievement in African American comic book history. The Milestone deal was ground breaking and the universe is still alive and relevant. Milestone has achieved in comics the same kind of reverence the Tucker achieved in the automobile industry or Guns ‘n’ Roses achieved in Rock and Roll, all three burst on the scene, changed the game and for whatever reason lived a short life but has never been forgotten.

What many people don’t realize is Milestone still exists and is still alive in media if not in a monthly series of comic books. Static Shock is still seen on television, Milestone characters are often featured on other DC comics animated shows and Milestone comic book projects still are being created.

Milestone’s 20th anniversary will be celebrated and in the coming months happenings will be reveled. I just can’t tell you now; if I did Denys Cowan would see to it that I join Tupac and Biggie. Yes, I’ve used that line before and I will continue to use it until LAPD does it job and finds their killers…or someone comments how clever and witty that line is. I’m good with whatever comes first.

What I can say is ComicMix readers who are Milestone fans have a guy on the inside. As we all know with great power comes first hand knowledge premiering here at ComicMix before anywhere else.

That is, if I remember to write it after it’s finalized but before the press release goes industry wide.

I’ll try and remember but once I was told over the phone I just had a huge project green lit and could now talk about it. The very next call I was on not three minutes later was with an entertainment magazine doing a profile on me and like a dick I forgot to mention the venture when asked about what projects I was working on.

That omission was like forgetting to mention I own a dog when being interviewed for a cover story in Dog Magazine.

Last thing, for all you fan boys who are still a bit “girl challenged” if your girlfriend…wait, what am I saying? Girlfriend? Fan boys? Ok, if the girl you are smitten with or any girl asks you if she looks like she was getting fat or the classic, do I look fat in this dress?

The answer is always no.

If the heifer weights 300 pounds and is always sucking on a saltlick, the answer is always no.

Trust me, don’t say anything remotely like what I said, I’m lucky to be alive and ten years after the break up I’m still looking over my shoulder.