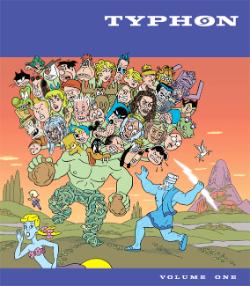 At 50, I’m pretty set in my comic book reading habits.  Having been raised largely on the output from DC Comics and Marvel, I have fairly mainstream tastes.  Now and then, though, I push myself to see what else is out there. As a result, reading Danny Hellman’s recently published [[[Typhon]]] anthology was an eye-opening experience.

The 192-page full-color trade paperback allows me the chance to see who else is producing comic book work.  Typhon takes its name from Greek mythology and is a creature with hundreds of hissing serpents, outdoing the Medusa. Venom was said to drip form their eyes and lava to be spit from their mouths. There are no super-heroes, no continuing characters, nothing based on a media property (although Droopy appears in one story).  Each tendril from the creature’s head is the product of the fertile imagination of the 42 creators who contributed to over the course of several years.

Hellman may be best known for his [[[Legal Action Comics]]] in addition to his own work at Time, Newsweek, Fortune, Forbes, The Wall Street Journal, and the Village Voice. Promoting the book, he said, “I realized that I was looking at a far more ambitious book than what I’d done previously. The work presented in Typhon covers a wide spectrum of what’s possible in comics, from zany, offbeat humor to unnerving existential angst, and on to chilling horror, all of it brought to life with breathtaking, cutting-edge artwork.

“Anthologies give us the opportunity to enjoy work by talented cartoonists who, for whatever reason, don’t produce enough material to fill out solo books. As an editor of anthologies, I’m excited to provide a showcase for artists and work that we might not see otherwise. Diversity makes for a richer comics scene.”

Everything he says is correct and to be applauded. I really enjoyed the colorful, inventive use of the page from Hans Rickheit, Rupert Bottenberg, Tobias Tak, and Fiona Smyth.  They created visually arresting images and used color in appealing ways. On the other hand, I could not make heads or tails out of Bald Eagles’ eight page head trip that is hard on the eyes and unreadable.

On the other hand, way too often I’d reach the end of these short works and scratch my head.  “What the hell was that all about?” was a repeated refrain. I’m used to stories about character or stories about something.  Yet, these works seem to be characters and situations that begin and end and say nothing.  Too frequently, I think the creators were out to amuse themselves, forgetting their audience. Rick Trembles’ “[[[Goopy Spasms]]]” feels like it was done because he could not because he had something say or share and was generally off-putting.

Hellman told Tom Spurgeon, “…It can be tough to pin down precisely what ‘good drawing’ is. Ultimately, beautiful art is a matter of taste. Drawing chops, anatomical knowledge, the ability to recreate the natural world in two dimensions and have it be both accurate and pleasing to the eye; these are important. But what’s really vital is that we connect with the art on an emotional, perhaps spiritual level.”

I’m all in favor of creative freedom but if someone wants my $24.95, then the editor of the collection has to step up and guide the talent to make certain their point, if there is one, gets across, from page to reader.  Here, Hellman spectacularly fails.

He kicks off the collection with his own “[[[The Terror in Peep Booth 5]]]” which looks and reads closest to a mainstream comic, complete with beginning, middle and end. After that, though, it’s all over the place.  Perhaps the most moving piece is Tim Lane’s “The Manic Depressive from Another Planet”.

I enjoyed being exposed to new voices and talents but come away disappointed that there are all these people with very little to say.