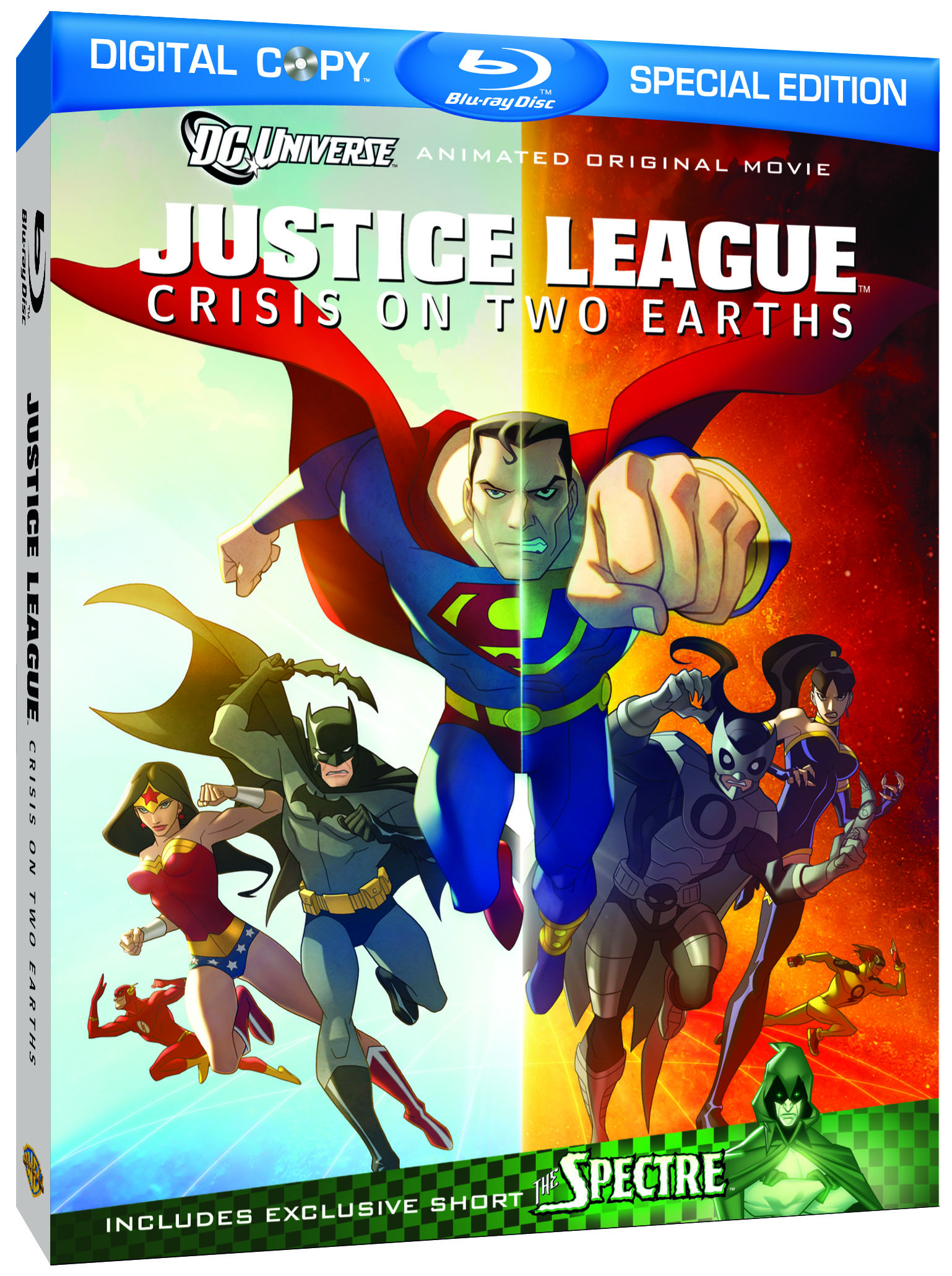 DC Comics brought the notion of parallel universes to comics, beginning with the classic “[[[Flash of Two Worlds]]]” and then began the annual team-ups between the Justice League of America and the Justice Society of America. Since then, the inhabitants of Earth -3, the Crime Syndicate of America, have been interpreted and reinterpreted with regularity. As a result, they have remained a popular aspect of the multiverse and certainly ripe for use in animation.

[[[Justice League: Crisis on Two Worlds]]] brings us a brand new take on the CSA, using Grant Morrison’s [[[JLA: Earth-2]]] graphic novel as a launching pad and going in a brand new direction.  The original animated feature goes on sale this month in a variety of formats from Warner Premiere and Warner Home Video. With a script from veteran comics and animation writer Dwayne McDuffie, the story posits an early version of the JLA with a limited membership. We open as they are still building their satellite headquarters only to have their work interrupted by the arrival of the parallel universe Lex Luthor.

On his world, the CSA has effectively taken control of the world, dividing it in six sections with each member exerting control through ten super-powered “made men”. Luthor and the Jester were the last of the metahuman resistance but the Joker-doppelganger sacrifices himself, taking their version of the Martian Manhunter with him, to allow Luthor to escape.

The JLA argues whether or not their mission should include other realties and when Batman is outvoted, he remains behind to oversee construction. The others cross the barrier and the action begins, rarely letting up. Overall, it’s a swift story that’s very entertaining with some playful touches including Slade Wilson as Earth-2’s US President. We see many “evil” versions of familiar JLAers in addition to the addition of new heroes to the JLA, so we get to watch the growth of the World’s Greatest Super-Heroes.

It’s far from perfect including my dislike for the character designs. Each of the Warner Premier videos is stand-alone and that seems to mean they are forced to reimagine how the heroes appear. This time, they’re a little too lean, too angular to appear as powerful as they should be, notably Superman. While a stellar alignment of voices is used, most feel miscast or bad matches to the characters designed. For me, the best characterization, dialogue and voice work are seen in Superwoman, performed by Gina Torres.

The overall threat, put into place by Owlman, has a poor rationale while the resolution leaves huge dangling threads. It’s a good effort, overall, but also not WP’s strongest offering. 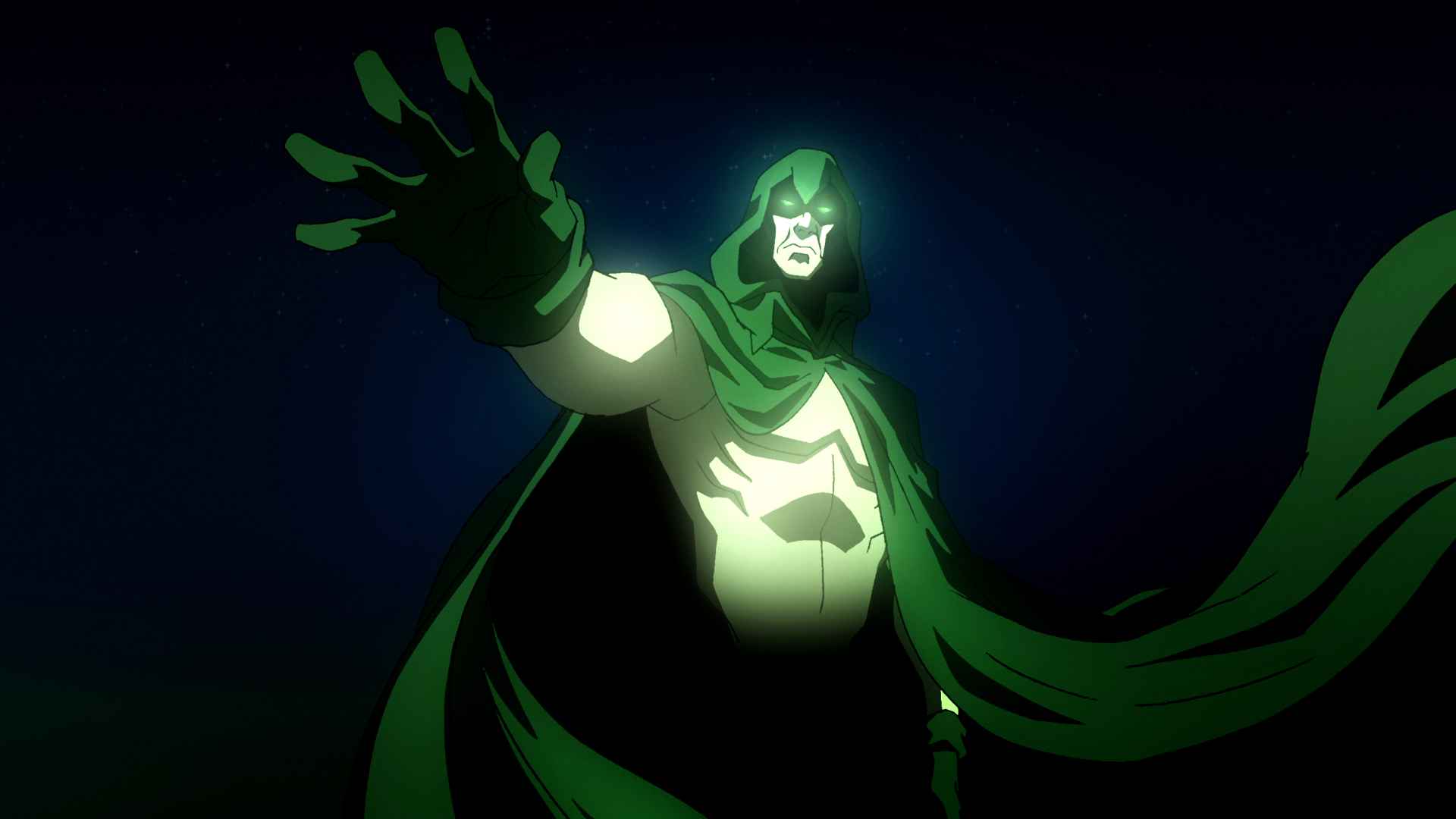 What’s nice, though, is that we’re now getting DC Showcase, shorts
spotlighting other heroes. The disc offers up The Spectre in an 11
minute tale written by Steve Niles who does a nice job. This is the
Michael Fleisher/Jim Aparo wrath of god Spectre and Niles captures that
feel while the visuals evoke a 1970s vibe down the “grainy” look of the
video and fashion sense. If they can maintain this level, I’m all for
more.

The extras are numerous, especially on the Blu-ray. DCU: The New World
features Paul Levitz, Dan DiDio, Mike Carlin, Geoff Johns, Brad Meltzer,
Rags Morales and others talking about what the word “crisis” means to
fans and how it has come to define the DCU in the past decade.
Unfortunately, the video narrative is a little all over the place so
you’re not entirely sure what this has to do to support the main
feature. In 33 minutes, they give lip service to the original crossovers
but never get into the multiverse nor do they explain how that led to
the Crisis on Infinite Earths but then talk about using the title in
every major event from Identify Crisis to Final Crisis. And again, you
have no real idea what these stories were about and how they play with
the parallel worlds concept. The producers clearly blew making this
accessible to the current fans and the new fans attracted to the video.
(Personally, I was delighted to see so many covers of collected editions
I edited plus the COIE covers used to illustrate the documentary.) 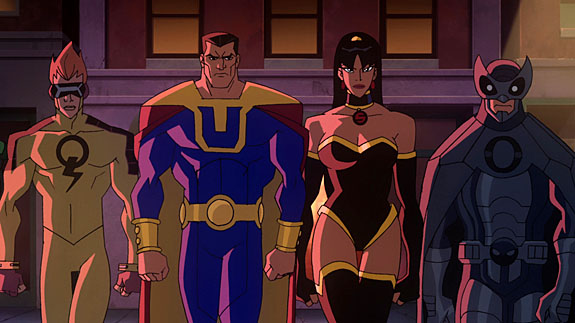 Other extras include Bruce Timm Presents – Four Bonus JL Episodes; the
live action pilot to Lynda Carter’s [[[Wonder Woman]]] (which is sadly
horrible) and Justin Hartley’s Mercy Reef-Aquaman unaired pilot (which
is actually pretty okay) along with repeat looks at the last three
offerings [[[Superman/Batman]]]: [[[Public Enemies]]], [[[Green Lantern]]], and [[[Wonder Woman]]]. Then there’s the [[[First Look at Batman: Under the Red Hood]]], a nearly 14 minute teaser for this summer’s release. This adapts Judd Winick’s fairly ordinary and unnecessary resurrection of Jason Todd and frankly, it doesn’t look all that great despite the commentary telling
us how important and wonderful it is. The best part may be Neil Patrick
Harris cast to voice Nightwing, but we can hope the story is better than
the source material.

Overall, this is a bountiful collection topped with a pretty good action
story. But from beginning to end, it all could have been better.