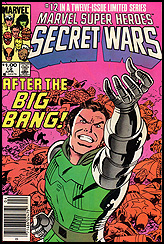 When I was a kid, comics were all I thought about. There was no better time in my day than when I was finished all my crap schoolwork and was able to turn my attention to the Fantastic Four, Spider-Man or Batman

I was a child of DC but soon I was just as vested in Marvel as I was in DC. I remember when Kirby left Marvel to do the Fourth World books at DC. That to me at the time was as big a deal as Obama becoming the first black President is now.

Kirby coming to DC was Huge. I’ll never forget when I got my first issue of the Forever People and saw Kirby’s Here on the cover.

Comics golden age for me was the second silver age. That second silver age was Walt Simonson’s Thor, Howard Chaykin’s American Flagg!, Frank Miller’s Daredevil, Marvel’s Secret Wars, The Killing Joke, the Dark Knight, The Watchmen and about another dozen or so titles.

In my day I think comics were better than they are today.

That’s my opinion and I’m welcome to it but consider the following before you dismiss me, are you tired of new universes and new number ones?

In my day a number one was the Holy Grail of the comic book world.

New number ones are as common as a new Kardashian lover and just as relevant.

While I’m on the subject, Kim Kardashian has no talent and contributes nothing to the world, yet millions of people hang on her every stupid move.  Now don’t get me wrong, I have nothing but respect for her milking America for millions of dollars when she has no value whatsoever.

That’s not a joke, I respect anyone who can figure out a way to milk millions from people with absolutely no talent or value. Again I’m not kidding I respect that kind of moxey.

Come the (bad word here) on, what does she or her family contribute except some of them have really nice tits? Oh and yes, I’d hit that but that’s beside the point. She and her family really have no significance in the real world.

Comics on the other hand do have significance in the real world.

How so you ask?

A hundred years from now Superman will still be relevant. Kim? She may not be relevant in two years. I know this for sure because America has a way of waking up to bullshit. It may take a moment but soon perhaps very soon the country and world will see that the Emperor (Empress?) has no clothes.

How do I know this for sure? Two words: Paris Hilton.

But I digress (thinking about you, Peter). I maintain that the comics in my day were better than the comics today and what follows are my admittedly flawed arguments.

When ever a comic universe goes to a new number one that erases the vast history of what was gone before. It’s a ‘do over’ and a ‘screw you’ to fans that loved the universe at the same time. When Marvel did Secret Wars and DC did Crisis those were really massive events but they were not do overs or a screw you to fans. Those were events that changed the universe not events that discarded the universe.

They were also the kind of events you talked about for years because they really were events.

Now an event is talked about until the next event, two, three weeks later.

When Marv Wolfman killed Barry Allen (something to this day I have not forgiven him for) I felt that lost. When Stan Lee killed Gwen Stacy I felt I had lost a girlfriend. Now these sort of deaths are commonplace and it my humble opinion it’s because of Superman.

When Superman “died” no one and I mean no one in the comic book world thought for a second he was really dead. The only people who thought he was really dead were the suckers who brought 50 copies thinking one day they would be worth millions.

If you can kill the most important superhero in the history of the industry then everything and I mean everything is fair game.

That fair game seems to be monthly now. When DC killed Superman it, at the time, was a bold move designed to boost the icon’s lagging sales. Now characters dying, coming out of the closet, going over to the dark side, etc. is no longer an event it’s as common as the Cubs not making the World Series. The Cubs suck; that’s why they don’t make the series. Comic book creators don’t suck; comic book creators are better than the bullshit event like Archie kissing a black girl.

What the heck was that anyway? Archie Andrews pulling a black girl? Talk about imaginary stories.

Yes, I’m quite aware that the audience today is not me. Yes, there are books being done today that quite frankly are works of art and literary genius. Yes, some books today have transcended comics, TV and film and become part of what fuels movements.

Forget all of that. In my day comics were better and that is that.

Bottom line your comics suck and mine don’t.

WEDNESDAY: Mike Gold Babbles On and On…