Mike Gold: We Have Met The Enemy And He Is Us 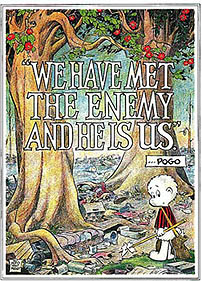 A great many idioms have their roots planted firmly in the comics media, and to the present generation there is none more vital than Walt Kelly’s famous phrase that occupies the headline space above.

Kelly, in case you didn’t know (and shame on you for that), was the cartoonist who created, wrote and drew the feature Pogo for comic books, newspaper strips, and miniature trade paperbacks starting in 1942 (Animal Comics #1, published by Dell). He continued working on Pogo until his death in 1973. Pogo was a funny, clever strip that was uniquely gentle in its political and sociological satire. The phrase “We have met the enemy and he is us” was used several times, usually in conjunction with ecological issues. Indeed, for Earth Day 1970 Kelly produced a lavish poster with Pogo looking at a beautiful forest littered with garbage; it employed this famous phrase.

A couple days ago I was reading a Pogo trade paperback released in 1972 titled “We Have Met The Enemy And He Is Us,” a collection of short… let’s call them graphic short stories. The eponymously titled story wasn’t about ecology at all. In point of fact, were it published today, January 16 2013, I suspect most people would think it was in reference to our extremely unyielding, highly polarized, and therefore do-nothing Congress.

I reprint it here (© 1972 Walt Kelly Estate. All Rights Reserved.) without further comment, except to note that I edited out two panels so that it would make sense without the surrounding story. Enjoy the brilliance of a true master of the form, but dread the reality it reflects. 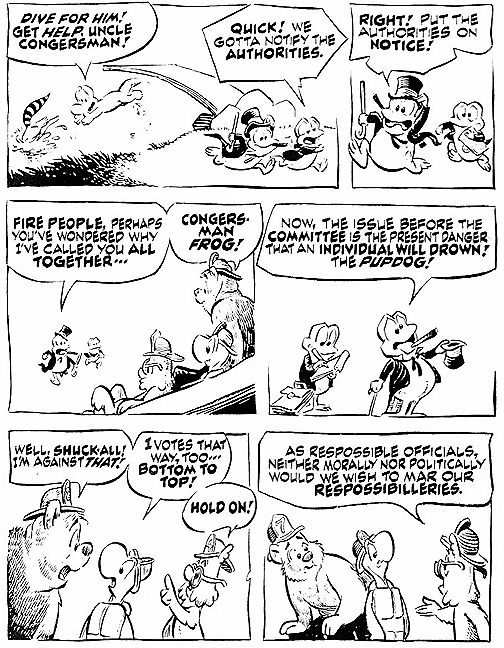