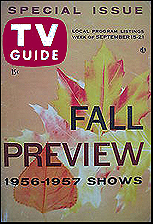 I was a little slow when it came to adopting television as a part of my lifestyle. I only cared about cartoons as a small child, and no wonder: teevee was mostly local and cheaply produced and all those public domain Fleischer and Warner Bros. cartoons were a delight. They still are. I didn’t get sucked into the mainstream until pre-adolescence.

When that happened, TV Guide was my bible. A digest-sized magazine that contained detailed descriptions of every local and network show to be aired in the following week, I, like my peers, pretty much planned our lives around the boob tube. The annual Fall Preview issue was a genuine event.

When it comes to broadcast entertainment today, TV Guide has become less than irrelevant – it’s useless. Cable has brought us so many channels if the magazine stuck to its original concept it would take a half hour to read the next 30 minutes of descriptions. The printed grid tells us nothing we can’t get from our cable grid. And the vaunted Fall Preview issue presumes the “new fall season” is unique. It is not. With the exponential growth of choice, “new seasons” come with each new season.

But if my jaded, tube-weary brainpan is capable of generating any excitement similar to that of the old new fall season, it happens right now, in January. Some of my favorites return this month: Justified, Community, Young Justice, Bill Maher. There are a number of promising-sounding shows such as Ripper Street, and before long we’ll have Louie, Hell On Wheels and Doctor Who back.

None of these (save Bill Maher) are what we used to think of as full-length series. We get maybe a dozen episodes of each annually. Even though each episode is played many times, teevee-watching isn’t quite the passive experience it once was.

All of this cable stuff already is being eclipsed by streaming media: Netflix and others have competitive original content, Apple has a box for sending stuff from a great many services (including, of course, its own) to the teevees in your house, and Intel is going to be rolling out an interesting new media box on a market-by-market basis starting soon. The larger cable companies have apps that allow you to pick up their service at home on your smartphones and tablets, and content suppliers such as HBO and the various networks allow you to steam their material to these same devices.

We’re probably just a heartbeat away from fulfilling the prediction made back in 1967 in the brilliant social satire, The President’s Analyst. Pretty soon we’ll just have a chip installed in our heads, and the fees will be debited to our bank accounts.

We don’t need drugs, alcohol or virtual reality. We have television.