Pulp Ark 2013, a Convention/Creators Conference centering around all aspects of New Pulp, was held April 26-28, 2013 in Springdale, AR.   As a part of the convention, the Pulp Ark Awards were given for the third year in a row.  The only comprehensive awards in the Pulp field chosen specifically by anyone wishing to nominate writers, creators, etc. for an award, The Pulp Ark Awards are given in a variety of categories.

Only one category within the Pulp Ark Awards is determined, not by the vote of the public, but by a committee selected to determine the winner.  The Pulp Ark Lifetime Achievement Award is given to a Person involved in Pulp that has devoted much of their life to participating in the production of and/or furthering the promotion and preservation of and education in Classic Pulp as well as supporting New Pulp either by being a participant or providing encouragement other ways. 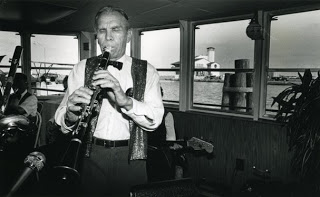 This year’s Pulp Ark Lifetime Achievement Award Winner as selected by the Committee began his Pulp involvement in the 1930s, finding many of his stories printed in the 1940s and 50s and moving onto other publications with fiction after the Pulps faded away in the mid 1950s.   Born in Texas, this year’s recipient learned much about life that he later translated into great western tales.  Being a self taught Jazz Musician, he saw much in his travels that informed his mystery and suspense stories, many with a Jazz background.  Writing for digests as well as penning his own books well after Pulps left the bookshelves, this author recently collected his stories and has released two date two volumes of work, with the assistance and support of his wife, Patti.  This work has so inspired writers today that a New Pulp Publishing company, Pro Se Productions, has licensed and began an imprint utilizing characters originally written by the author in his early career.

The recipient of the Pulp Ark 2013 Lifetime Achievement Award is Charles Boeckman.
Upon notification of receiving the award, Charles Boeckman provided the following statement– 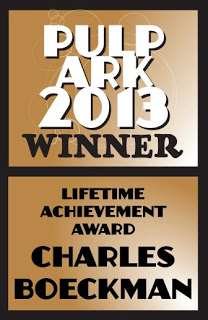 “I am very honored to receive the Pulp Ark Convention 2013 Lifetime Achievement Award. This was so unexpected and so gratifying. Until a couple of years ago, I thought the pulps were just a faded memory in the minds of anyone still alive who read them back in their hey day. Then I discovered the vibrant community of pulp and new pulp fans and writers, and my life suddenly took on new meaning. Connecting with pulp fans, republishing some of my vintage stories in anthologies, and finding some of my forgotten manuscripts in an old trunk havereawakened my passion to write, and at age 92, I am once again pounding on the keyboard.
It means so much that I will have concrete recognition of mycontribution to pulp fiction, something that I can proudly display and eventually leave to my progeny. Maybe it will help inspire them in some way.
Thank you so much, Pulp Ark Convention 2013.”
Share