SyFy (formerly known as the SciFi Channel) has acquired the US broadcast rights to the K-9 solo series, produced in Australia in 2010.  They will run the entire 26-episode series in a 13-hour marathon on Christmas Day. 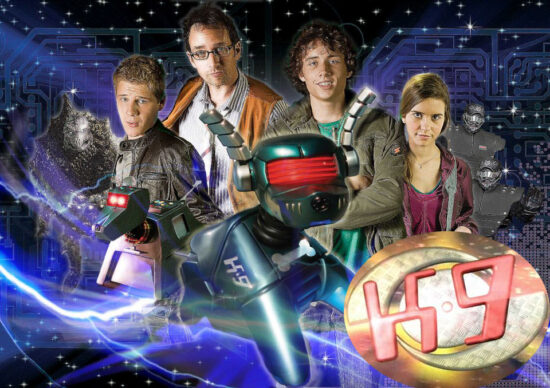 Featuring an updated K-9 design and a new group of characters, the series has been shown in many countries since its initial premiere.  The US is one of the last regions to see the series on TV.  The series is live-action, featuring a streamlined CGI K-9, voiced by John Leeson, the original voice of the “tin dog”.

K-9 is one of the most popular companions from the classic series of Doctor Who, with two different “models” traveling with The Doctor from 1977 – 1980, and making quite a few appearances afterwards..  Making his first appearance in the Bob Baker / Dave Martin adventure The Invisible Enemy, K-9 was the creation of Professor Marius, who built him as a replacement for his own dog back on Earth.  After the adventure, Marius asked The Doctor to care for K-9, as he was returning to Earth and would not be able to take him on the ship.  The original K-9 traveled with The Doctor and Leela for some time, and chose to remain with her on Gallifrey after the events of The Invasion of Time.  The Doctor built a new model almost immediately, and he was a companion of The Doctor and fellow Time Lady Romana for another three years, until they chose to remain in E-Space with Romana at the end of Warrior’s Gate.

A third K-9 unit was sent to Sarah Jane Smith as a gift from The Doctor, and became her adventuring confidant for many years, up until she met The Doctor again in School Reunion.  K-9 Mark III sacrificed himself in that adventure, but The Doctor was able to salvage enough to build a mark IV, which he left behind for Sarah Jane.  The spin-off series The Sarah Jane Adventures was green-lit almost immediately after this adventure, but Bob Baker had already made the deal for this new series, which is why K-9 appeared only in limited cameos for the first two series of SJA. 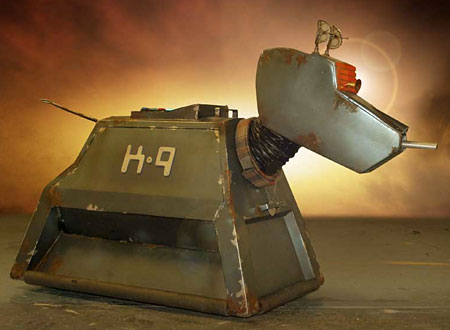 K-9 has had quite a few appearances in the prose and Big Finish audio adventures as well.  In the Gallifrey series of adventures, Romana returned to her home planet with her canine companion, and came to meet Leela, and HER canine Companion.  K-9s Mark I and II, humorously, did not get along, and often argued with each other.

While Doctor Who cannot be explicitly be named, the K-9 of the new series is clearly the same K-9 from the original. Specifically he’s K-9 Mark I, who survives and escapes the Time War, and winds up on late 21st century Earth.  After a brief fight where he is seemingly destroyed, he “regenerates” (a new system apparently installed for him by the Time Lords” into a new streamlined design.  There’s a second series of the show in the planning stages, in which the producers have promised another redesign, responding to feedback from the fans.

Creators Bob Baker and Dave Martin collaborated on all the Doctor Who TV scripts, as well as numerous other projects in British television.  Dave wrote four K-9 solo adventure novels in the early 80’s, and passed away in 2007. Bob Baker has had some small success away from Doctor Who as well – he co-wrote three of the Wallace and Gromit shorts, as well as the feature film The Curse of the Were-Rabbit.

With K-9’s appearance, we’ve seen every Doctor Who-related series in the US, save for the aforementioned Sarah Jane Adventures, starring the glorious Elisabeth Sladen.  While there’s no news of that show being picked up, needless to say it’d find a welcome audience.

The K-9 marathon runs Christmas Day from 10 AM – 11PM. The show is not yet scheduled for a regular time slot after the marathon. More info about the series can be found on its website, k9official.com.