Doctor Who has gotten a number of videogames in the last couple of years, from games for the Playstation 3 to a Nintendo 3Ds version of the card game Top Trumps.  Doctor Who: Legacy is the latest in the series, a game for iOS and Android tablets and phones that packs a great deal of addicting gameplay into a simple mechanic. 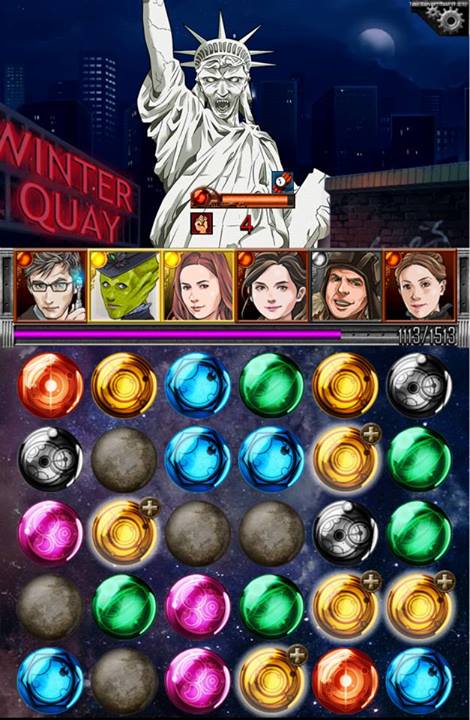 At its core, Legacy is an iteration of the “Line up three jewels” game as seen in the many variations of Bejweled. The big different is the player is not limited to moving an “orb” only one spot, but anywhere on the screen, within a number of seconds.  With orbs sliding out of its way as you go, this simple change allows a deft player to set up a number of combos in one play.  It’s s skill that takes a bit to get used to, but opens up a great deal of strategy.

In the game, you play The Doctor and his companions, each of whom are assigned one of five orb colors on the game board, with a sixth (pink) for restoring hit points..  You are presented with wave upon wave of villains who attack you with energy blasts and special attacks, shaving down your health.  When you line up three or more of one color, the character assigned to that color attacks the enemies, or the pink orbs restore health to the team.  Combos allow more than one character to attack at once, and multiplies the total damage.  Your characters have varied attack and hitpoint values they add to the team, and each has special powers that become available every few rounds – change orb colors, increase damage, or restore health.  Combining that with the flexible orb placement on the field, the game keeps itself fresh, more than simply swapping jewels endlessly.

Like all free-to-play games, there’s an option to buy items, represented here by Time Crystals, which allow you to continue playing if you’re well into a long level, are used to rank up your characters for greater power and strength, and to buy packs of extra companions.  The game is exceedingly fair about making the crystals available in the game as well, and with patience, you can score all the companions as random rewards for completing levels.  As a thank you for buying, the game allows you access to the “fan area” after your first purchase of 5 or more Crystals. The fan area offers extra levels, special “fan versions” of companions, and more bonuses to be added later.  It’s a fair value for at least that first five bucks; indeed the game itself would be worth that if they had chosen to charge.

One caveat – the game needs an internet connection at startup to sync with the servers and download updates, so have one ready before you play.  Right now the developers are running a special “Advent Calendar” promotion via their facebook page – Liking their page gives you access to promo codes for extra companions and outfits for your characters.  There’s a lot of value packed into the game, and it’s a welcome addition to your portable device.

The game is free for Apple and Android devices.