Michael Davis: Frankly my dear, they don’t give a damn. 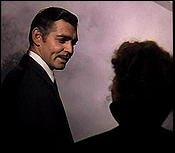 The title of this article is a variation on the most memorable film quote ever. “Frankly my dear, I don’t give a damn” spoken by Rhett Butler to Scarlet O’Hara in the immortal film, Gone With The Wind is the number one movie quote of all time, according to The American Film Institute.

After over two hours of actual time and years of movie time Rhett had finally had enough of Scarlet being a bitch and let her know how he felt. When Rhett finally let Scarlet know he was sick of her shit she came to a realization that she did indeed love him.

If Rhett and Scarlet were from the hood that conversation would have went a little something like this:

Rhett: Frankly my dear, I don’t give a damn…bitch.

That classic movie in so many ways reminds me of the San Diego Comic Con and Hollywood. How so, you ask?

That’s a lot of parties.

Every year it seems that little or no comic book people are invited to those Hollywood parties. I know of what I speak as I get invited to a bunch of those parties. I stopped going a few years ago. I got sick and tired of being at a party and the only mofo I knew from the industry was whoever was my plus 1.

Yes, there are exceptions. I’m sure that Len Wein and his creative peers get invited to any studio party that is making one of their characters into a movie or TV show. I’m sure Len gets to bring a few of his peeps but a room full of comic book people you will not see at a Hollywood party.

Except at my parties. Yes, I always have a cool ass celebrity host, this year it’s Jamie Kennedy, and yes I have big name Hollywood types attending but the majority of my guests are good old fashion SDCC and comic book folk.

Yep, good old comic book geeks. Friends of mine, creators I just meet at the con, retailors, mega fans, moms of mega fans and random hot Asian women who I just so happen to find invites for after I have no more invites. Go figure.

Speaking of moms, last year I met this woman who brought her grown ass son to the convention but could not get a pass for her self. We got her a pass to the con and she spent a great deal of my party hanging out with Wayne Brady. That, if I say so myself, was cool.

I’m not knocking Hollywood because that’s just the way they operate. I’m still amazed at the people that got mad at the tiger for mauling Roy. Don’t blame the tiger for being a tiger. I can’t blame Hollywood for being a selfish self-congratulatory entity that sees the comic book industry as an ugly stepchild.

The San Diego Comic Con is our house.

We build it. We own it. We live there.

I do believe that one day soon Hollywood will fully accept us for what we are: an industry without which they would be banking on films like My Left Foot to do 100 million in a weekend.

Yeah, like that shit is ever going to happen.

I hope to see you guys at SDCC and perhaps at my party Friday night.

Oh, and Hollywood, get your shit together, don’t make us go all Rhett Butler on your ass.