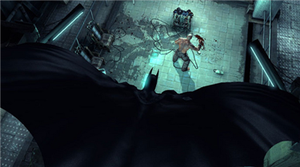 In what may be the really profitable digital strategy for DC, Batman: Arkham City

, the critically acclaimed sequel to Batman: Arkham Asylum from Warner Bros. Interactive Entertainment and Rocksteady Studios has become the Highest Reviewed Video Game of 2011 on Xbox 360 and Playstation 3, and has shipped more than 4.6 million units worldwide since its October 18 launch in North America.

These sales figures are more than double the number of units the previous title sold in the same time period, and has already solidified the games rank as a contender for one of the top-selling titles of this year. Also, the game currently stands as the highest reviewed PS3 and 360 game of this year on Metacritic.com with average scores of 96 and 95 respectively.

Building on the intense atmosphere and story from the original game, Batman: Arkham City drops players into a section of Gotham, shut off from the main city, and over run by the inmates of the former asylum. Gangs wage war against each other and a new threat looms to take over Gotham as a whole. Cameos from Catwoman, Two-Face and more from Batman’s Rogues Gallery litter every single scene in the game, and coupled with the excellent storytelling, make it one of, if not the best superhero game ever. Look for our review in a day or two.