A newly released action packed ePulp anthology unleashes 5 new tales inspired by the pulp magazines of the 1920s – 1940s. They are not for the faint of heart. Things will get intense and stuff on these pages can’t be unread. 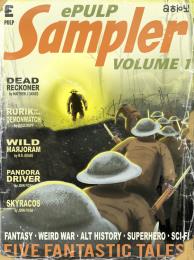 <!–[if !vml]–><!–[endif]–>
Get ready to explore strange worlds, visit forgotten pasts, and delve into parallel histories. Prepare to encounter an eclectic mix of heroes walking the line between life and death.
* Duck as Rurik’s blade carves demons in the Celtic landscape of dark fantasy.
As a rite of passage young Rurik faced a Demonhound. During his trial the creature’s flaming tentacles scarred Rurik leaving a mark coiling up his arm, shoulder and chest. After he triumphed in battle, Rurik carved a bone from the slain creatures body then sharpened it into strange looking sword. Now he patrols the badlands for more monsters and slays them with the very remains of their dead brethren. As the man grew so did his and legend.
* Witness the Dead Reckoner, a battlefield ghost looking for absolution in a weird war tale.
Anaxander Jones enlisted in the British Imperial Army when he was 18. That was in 1876. While assigned to the colonial troops in darkest Africa he found himself embroiled in the Zulu Wars. Armed with superior firepower and roman pride, the British war machine outclassed the savages toting spears and superstitions, but something misfired. Anaxander was infected by a Zulu curse, resurrected as the Dead Reckoner and damned to atone for the sins of empire. Now he’s yanked from battlefield to battlefield throughout history to witness the horrors of war, over and over again.
* Face Nazi occupation of USA with Wild Marjoram in an alternate history.
Wild Marjoram is a blonde haired blue eyed mechanic with a locket that holds the key to her past. This perfect Aryan specimen lives in hiding from the Nazi occupation. If they discovered her, she’s be condemned to the fate of a broodmare. But she’s not the type of girl to give up without a fight.
* Race through the Great Depression on an errand of mercy with Pandora Driver, a noir superheroine.
Pandora Driver was the relentless avenger of the common man. She sifts right from wrong in a realm where the villains were the local gentry and the heroes were outlaws. Pandora was a mistress of disguise who used sly audacity and an unstoppable Car-of-Tomorrow to unleash chaos into the halls of wealth and power.
* Fly across the universe with the Skyracos in a retro sci-fi adventure.
Skyracos are winged warriors who struggle to keep their humanity while executing unsavory missions on alien worlds. Though they hail from the planet Centrus, their technology is based in WWII with a hint of alien super-science. They operate on the frontier of the known and unimagined where they are forced to interpret crises and dispense justice on their terms, or so they think.
Whether you’re a nostalgian, dieselpunk, pulp fan,  sci-fi and fantasy aficionado, or ebook spelunker, there’s something in this collection for you to explore. However, I suggest you sample them all.
They ain’t Shakespeare. They’re  pure Pulp!
“ePulp Sampler Vol 1” is currently available on your favorite eBookstores. Download your free copy before it’s too late!
Amazon
http://www.amazon.com/ePulp-Sampler-Vol-1-ebook/dp/B00E0ODBVM/
Barnes and Noble (*.99)
http://www.barnesandnoble.com/w/epulp-sampler-vol-1-john-picha/1116101551?ean=2940148748199
Drivethrufiction
http://www.drivethrufiction.com/product/116988/ePulp-Sampler-Vol-1
Google Play
https://play.google.com/store/books/details/ePulp_Sampler_Vol_1?id=90MsUkzabyIC&hl=en
iBookstore
https://itunes.apple.com/us/book/epulp-sampler-vol-1/id674970717?mt=11
Kobo
http://store.kobobooks.com/en-US/Books/epulp-sampler-vol-1
Lulu
http://www.lulu.com/shop/john-picha/epulp-sampler-vol-1/ebook/product-21119435.html
Omnilit
https://www.omnilit.com/product-epulpsamplervol1-1245794-235.html
Smashwords
https://www.smashwords.com/books/view/338252
Archive.org
https://archive.org/details/9780983477624
Feedbooks
http://www.feedbooks.com/userbook/31700/epulp-sampler-vol-1
Foboko
https://www.foboko.com/ebook/8054/sci-fi-fantasy/epulp-sampler-vol-1
Free-ebooks.net
http://www.free-ebooks.net/ebook/ePulp-Sampler-Vol-1
Project Gutenberg
http://self.gutenberg.org/details.aspx?bookid=2828254
Scribd
http://www.scribd.com/doc/154570492/ePulp-Sampler-Vol-1
Share