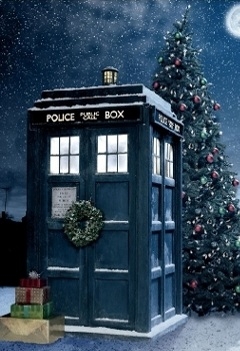 The prequel and trailer for the Doctor Who Christmas Special has just been posted via the BBC, hot off its appearance on the Children In Need annual appeal.

As reported earlier in the week, the BBC continues its tradition of presenting an exclusive clip for the charity’s annual telethon.  The clips have varied from trailers, exclusive scenes, and special greetings from the cast.

This year’s trailer offers a few tidbits both new and confirmed, including the name of the new Companion (Clara, as was rumored), a look at this year’s holiday-themed monster (snowmen, tho not apparently the Abominable variety so many of us were hoping for) and a peek at returning aliens Strax the Sontaran nurse (Dan Starkey) and sword-wielding reptilian lesbian Vastra (Neve McIntosh), and the presumptive baddie, played by Richard E. Grant (Hudson Hawk, How to Get Ahead In Advertising).

Because producer Steven Moffat is evil and feeds on our tears, the intro also pays lip service to the swirling cloud of theories about Clara somehow being connected to Oswin Oswald, played by Jenna-Louise Coleman in the season opener, Asylum of the Daleks. Moffat has already said in an interview that “That’s exactly the question I want you asking”, so he’s clearly doing what he can to get that happening.

Donations to Children in Need can be made at their website.