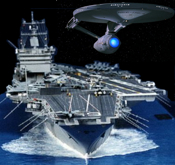 Various and sundry thoughts from the mind of Mindy this week:

The USS Enterprise (CVN-65), the eighth U.S. Navy vessel to bear that name, was decommissioned this week after 50 years of service. The world’s first nuclear-powered aircraft carrier made her maiden voyage on January 12, 1962 and her first mission was tracking and monitoring the first orbital flight of Project Mercury, with Lt. Col. John Glenn aboard the Friendship 7 capsule. In popular culture, the Enterprise was the home base of Lt. Pete “Maverick” Mitchell (Tom Cruise) in Top Gun, with the late director Tony Scott filming and incorporating flight deck operations into the film, and it was the flagship of the U.S. Navy fleet participating in The Hunt For Red October.

Then, of course, there is Star Trek – and did you know that Gene Roddenberry’s original starship name was the USS Yorktown? But the fame and status of the sea-going Enterprise led to starship being rechristened the USS Enterprise NC-1701. (Art Director Matt Jeffries – yes, for whom the Jeffries Tubes are named – used the USS Enterprise CVN-65 for scale when designing the original starship.) Star Trek and her fans – through a massive letter writing campaign and, I’m sure, encouraged by not a few NASA employees – returned the favor when NASA’s first Space Shuttle was named Enterprise. And in Star Trek: First Contact, we see that models of all the ships named Enterprise hanging in a showcase in Jean-Luc’s office. (“You broke your little ships,” says Lily Sloane, played by Alfre Woodward, after Picard goes “Ahab” in his desire vengeance against Borg throwing his phaser rifle through the glass walls of the showcase.)

Staying with Star Trek…I just rewatched J.J. Abram’s remake last night, and the more I see it, the more I love it. I continue to be especially impressed by Karl Urban’s Dr. Leonard McCoy – if I closed my eyes, I’d be hard-pressed not to say it was DeForest Kelley speaking.

Again, speaking of “all things Trek” – although I am generally not a fan of comic adaption of live-action TV shows and movies, I gotta say I’m loving IDW’s Star Trek, written by Mike Johnson with art by Claudia Balboni and Stephen Molnar. Johnson is following the original series story lines, with just the right twists of plot to adhere to the “new” Trek and doing an excellent job of capturing the personalities of Kirk/Pine, Spock/Quinto, Scotty/Pegg, Uhura/Saldana and the rest of the crew with his dialogue. Kudos to the entire team!

On the other hand…Dark Horse’s Spike mini-series sucks. I mean, Spike on the moon? Gimme a fucking break! In fact, generally speaking, their whole Buffy line sucks. Really disappointed. Oh, well, dropping it will save me money.

After almost 30 years, my local comics shop, Vector Books, has closed. Joe and Tina and Frank have been a part of my life for all those 30 years, and I wish them love and health and all the best in the future. But a new comics emporium has opened to take over from Vector (and with Vector’s blessing). It’s Manifest Comics And Cards, and I’ll be interviewing its young owner, Michael, in the future to find out how nuts (and brave) he is to open a shop at a time when so many are closing.

What fucking world do the Republicans live in? Who the fuck cares what Grover Norquist thinks? Attention John Boehmer!!!! Your job is to lead, not to follow the bug-fucked extremists and Tea Party wingnuts or to worry about losing your position as Speaker of the House! Get the deal done, for Christ’s sake! You can’t blame Obama this time! Like we said in the 60s, the whole world is watching!

How many of you had to Google labia majora and labia minora from my column last week? (Thanks to Mike Gold for this.)

Over at The League Of Woman Bloggers on Facebook, there is mucho discussion going on about the attack on girl geeks by boy geeks. Much geekiness is ensuing.

Okay, who here is a Homeland fan? Is Brody now a triple agent, again loyal to Nazir? What didn’t he tell Carrie, Saul, and Quinn in the debriefing? What did he make up? (I’m betting the being tied to a car battery part.) How long did it take before you realized that Virgil and Max were in Quinn’s apartment? (I thought they were in Roya’s.) Who is Dar Adal, the guy that Quinn met on the bus? (Yeah, yeah, I know he’s F. Murray Abraham…) Who is Quinn – FBI? Black-ops CIA? Mole? (I don’t think he is – too obvious.) Was the whole “terrorist attack on returning veterans” a MacGuffin, and the real attack is still coming? Is Estes as incompetent as he seems?  Why did he send Quinn out to kill Brody? Why did Saul go to Philadelphia, knowing that Quinn would find out? And why does Jessica keep calling her husband by his last name?