FIGHT PULP PUTS THE KNOCKOUT IN YOUR PULP STOCKING THIS CHRISTMAS 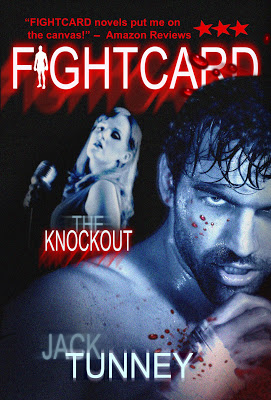 Fight Card Books’ December publication, Fight Card: The Knockout, is now available for Kindle via Amazon. Says Fight Card’s Paul Bishop of the new release, “This time up the venerable Robert J. Randisi is behind the mask of Jack Tunney. Bob Randisi is a tremendously prolific author who has written in many genres. Many of us also know Bob as the founder of the Private-Eye Writers of America, the organization behind the prestigious Shamus awards. A great guy, a great writer, and a great addition to the Fight Card canon.”

About Fight Card: The Knockout:
Brooklyn, 1954

Frankie ‘The Piston’ Corleone was an up-and-coming light heavyweight fighter until a broken hand took him out of contention. Now, Frankie works as a private eye, occasionally taking sparring work to stay in shape make ends meet.

Cappy O’Brien has trained a lot of fighters, including Frankie. But Cappy has never had a real contender until now … Candy Marquez is the real deal, and after being battered by Marquez during several rounds of sparring, Frankie has to agree. But the fight game is as crooked as a dog’s hind leg, and other trainers and the mob all want a piece of Cappy’s best prospect.

When Cappy winds up dead, it’s time for Frankie to take off the gloves and take The Piston’s punching power to the street to knockout a killer …

You can order your very own ebook copy of Fight Card: The Knockout here.

2013 looks to be a watershed year for the Fight Card series. January brings Fight Card: Rumble In The Jungle from our own man down under, David Foster … This is a very pulpy tale with an international setting in South Africa. February, will see Fight Card: Against The Ropes visit the 1920’s with a tale by Terrence McCaulley, which is a prequel to his current novel “Prohibition” from Airship 27 Productions (with whom we will be cross-promoting).

Much more to come including a new issue of Fight Fictioneeers Magazine.