Review: ‘Strange and Stranger: The World of Steve Ditko’ 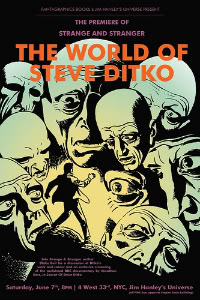 is an unquestionable triumph, the latest in a top-notch series of art books from Fantagraphics.

run to his eventually paying-the-bills work in cartoon coloring books. This art comes with insightful analysis from Bell, who even gives side-by-side comparisons with art from some of the artists who inspired Ditko.

Yet, I came away from the book disappointed, because as well as it explains Ditko as an artist, it hardly begins to explain him as a man.

Admittedly, that’s a tough task, as the reclusive Ditko hasn’t been interviewed since bell bottoms were cool (or thereabouts), but it’s the task Bell sets out upon. The chapters accompanying the art read more than anything like a more-detailed Wikipedia page, full of facts but empty of story.

We hear about all the important moments in Ditko’s career, often fleshed out through the quotes of his acquaintances, but we hear less than whispers of his personal life or childhood. Perhaps Bell put on a reporter’s hat and tried to find some such information, but if so, he includes neither that information nor an account of how he failed to obtain it.

The few included quotes from Ditko are flatly boring descriptors of his work, overladen with parentheticals. And, again, they only hint at who he is.

For people who come in with a familiarity of Ditko’s story, like ComicMix editor Mike Gold, that’s a pardonable offense. But for any more unfamiliar reader looking to [[[Strange and Stranger]]] as a true biography, they’re sure to find it sorely lacking.

There’s a clear narrative to Ditko’s life; it’s a tragic story of a man who followed the philosophy he thought would make him great, but instead Ayn Rand’s objectivism would prevent him from achieving that greatness. And that story remains untold.