Review: “The Book of Human Insects” by Osamu Tezuka 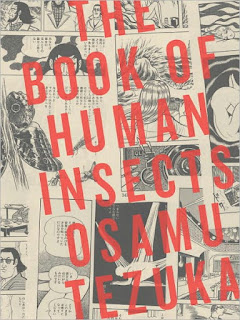 Some writers love their characters, and can hardly bear to have anything bad happen to them. Osamu Tezuka, though, is not one of them: particularly in his books for adults, like MW, Ayako, Ode to Kirihito, and Apollo’s Song, he creates profoundly damaged — and damaging — characters, and then sets them up to bounce off each other like frenzied fighting cocks until he’s satisfied.

is another work in that vein, though even more so — its main character is a cuckoo of a woman, who “steals” the creative abilities of every person she comes into contact with, doing what they do just a bit better and more impressive and leaving them wrung out and ruined when she moves on. It’s from that period in Tezuka’s career when he was focusing on comics like this — it was serialized in Play Comic during 1970 and 71, at roughly the same time as Ode and Apollo. And, to be honest, the people that Toshiko Tomura (or any of her many other names) steals from aren’t much better than she is — they’re certainly not innocent, or anything more than slightly better than she is.

Tomura has just won a major literary award with her first book as Human Insects opens — but, as we come to see, that means it’s time for her to move on, since she can only have one great achievement in any field. (Since they’re not her achievements, really, except in that she takes them and makes them hers.) Human Insects follows Tomura as she stalks forward into new territory, and we also slowly discover the people — men, primarily; this is a story from the early ’70s and could be read as a curdled take on a certain kind of feminism — that she’s already met, seduced, co-opted, and abandoned already.

A Western story of the same era would probably spend a long time psychologizing about Tomura, explaining why she is the way she is, with references to her childhood traumas and whatnot. Tezuka, coming out of a different tradition, just presents Tomura: we see some hints of her past, and she clearly doesn’t have a healthy relationship with that, but there’s none of the deadening “now I’ll explain everything to you” that an American would have felt compelled to include in 1970. Tomura is nasty and manipulative and utterly self-centered: that’s just who she is. And, because that’s who she is, she will win, even when faced with men more powerful and seemingly as ruthless as she is.

Human Insects is not the most pleasant read, in common with Tezuka’s other books of this era: in a world full of scoundrels and bastards, there is only nastiness and back-stabbing. And Human Instincts doesn’t have the supernatural majesty of Ode to Kirihito or the epic family-saga sweep of Ayako (or the pure feral energy of MW), so it’s pleasures are at a more human scale, and driven by schadenfreude and bemused head-shaking. These are nasty people doing nasty things, but we recognize them all: Tezuka makes them all very real nasty people, doing exaggerated, large-scale versions of the kind of petty slights we see every day. Human Insects is a misanthropic book, as you’d expect from the title, but not an unconvincing one.