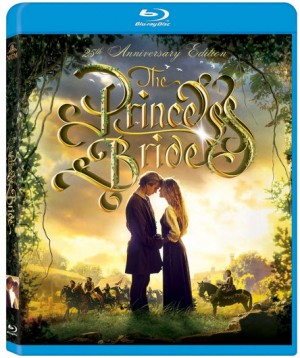 Hard to believe it’s been a quarter of a century since The Princess Bride was released to theaters. By then, I had adored William Goldman’s novel which was its basis and over time, as it hit cable then home video, it was watched repeatedly in my house. As a result, the kids grew up with it a part of their lives and they came to adore it with equal ardor. Sadly, when I tried to interest my eighth graders in seeing it recently, they stared blankly.

The conceit in the novel is that Goldman was giving us the “good parts” version of S. Morgenstern’s fantasy tale and that is adapted to the film as a grandfather (Peter Falk) reads the book to his sick grandson (Fred Savage). The rest of the fable involves the romance between beautiful Buttercup (Robin Wright) and dashing Westley (Cary Elwes) and the trials and tribulations that kept them apart – until the end when they finally kissed, one of the five greatest kisses ever recorded in history (or so we’re told). Between meeting and kissing, there are swordfights aplenty, death, resurrection, magic, cowardice, giants, tricksters, weird locales, and much more. Girls can love the romance, the boys can adore the action and both can laugh at the comical performances and clever dialogue.

Rob Reiner’s casting was pitch perfect as was his deft direction so all the elements came together to make an instant, enduring classic. With Wallace Shawn, Mandy Patinkin, Billy Crystal, Christopher Guest, and Andre the Giant, what could possibly go wrong? Nothing as it turns out and it’s a joy to see it one more time, in the 125th anniversary Blu-ray release from Warner Home Video. Reiner could have gone overboard with the humor but he reaches the edge of slapstick and pulls back time after time.

Given how often this has been previously released on DVD and Blu-ray, it’s comforting to see most of the extra features carried over here including both audio commentaries (Reiner and Goldman), The Art of Fencing (7:00), Cary Elwes’ Video Diary (4:00), a look at the Dread Pirate Roberts (12:00), twin pieces on the fantasy roots (26:00), a Makeup (11:00) piece; and “Untold Tales” (9:00). New to this edition is a 25th Anniversary Chat with Cary Elwes, Robin Wright and Rob Reiner (15:00) and Entering the Zeitgeist (15:00), examining the film’s role in today’s pop culture.

If you own one of the earlier versions, you may not need this but if you don’t have this on the shelf, this is well worth you (and your children’s) attention.