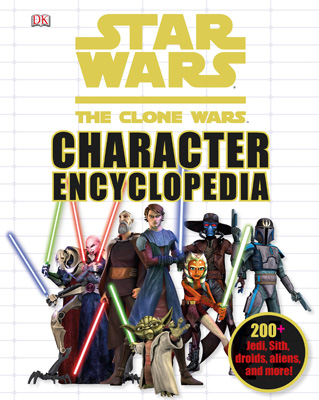 Ever since it was mentioned in the original [[[Star Wars]]], fans have always been curious about the events of the Clone Wars. It was a never a factor in the original film trilogy, just a nifty throwaway line to add depth to George Lucas’ mythology. Then we got to finally learn of the wars’ origins in [[[Attack of the Clones]]] (2002) and [[[Revenge of the Sith]]] (2005).

But people wanted to learn more and Lucasfilm happily obliged, first with Genndy Tartakovsky’s marvelous animated series, which ran from 2003–2005 and then the more recent 3D CGI series which has been running since 2008. Character designer Kilian Plunkett referred to the imaginative work of Tartakovsky when creating the look of this series and it visually is a good fit with the live-action films.

With a sprawling cast and campaigns occurring throughout the Galactic Empire, fans, casual and diehard alike, could benefit from a scorecard. DK comes to the rescue this month with [[[Star Wars: The Clone Wars Character Encyclopedia]]]. Measuring 9.25 x 6.25 inches, its at a smaller trim size than the more recent pop culture offerings.

There are 204 character profiles, a page apiece, covering the events of the first two seasons, all 44 episodes inclusive. Each page has a full-figure shot, vital statistics, some call outs to denote details and short paragraphs placing the character into context. Apparently, the content does not reflect events or characteristics from the first animated series.

Yes, the series airs on the Cartoon Network which has a younger audience, but since the book is described as being aimed for 8-17 years old, it also offers far too little in the way of detail. The uncredited writers should have given us some overview of the era, a brief timeline for events, and maybe a clue as to where each character made a first appearance.

Instead, we get surface details offering no greater understanding of the people and their place in the wars. Padme Amidala’s page, for example, tell us she is secretly married to Anakin and likes to look for the good in people. Nothing about her upbringing, her evolving relationship with Ani and other details to make her a more interesting and better understood character.

The CGI frame captures from episodes along with selected poses are a little too dark so details and expressions are needlessly obscured.

Much as we expected better from Lucas’ more recent efforts, so too have I come to expect more from DK. This book is pleasant to skim through but makes you want far more than is offered.