Marc Alan Fishman: Be A Team Player…Or Not 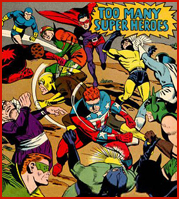 The notion is simple and appealing. The more the merrier. When DC launched “The Justice Society of America” back in 1940, the ideology was clear. Put more heroes into the book, and children would be more likely to buy it. And the children flocked to it for 57 issues. The rest, they say, is history. Lately, team books have been on my mind. What better way for a company to showcase many of their stars in a single place? And better than that? Where better to shove barely loved tertiary characters for the sake of filling a roster!

But with this notion comes obvious shortcomings, the biggest of which is what I plan on pissing and moaning about for a few paragraphs. Simply put? There’s too many teams, and too many shifts in the rosters for team books to be more than big distractions… and it’s starting to get under my skin.

So let’s start at the top. Too. Many. Teams. In a few months time, we’ll be privy to three Justice Leagues (and one alternate Earth Society), four (or more, it’s hard to say) Avengers teams, five X-Teams, Team Seven, Teen Titans, The Ravagers, Guardians of the Galaxy, and a new batch of Thunderbolts. How does a fan even begin? The problem is clear to me. While the appeal of jamming every available hero into a team is palpable for the sheer marketing of it all… all it’s doing is lowering the property values neighborhood wide.

One thing about team books is that they are truly hard to pull off well. Solo adventure books have a freedom to explore and expound. The plots can expand lengths of time, and space, or be confined to a single room and altercation. In team books, the ease with which one can be lazy is palpable. It’s simply par for the course to check in on all the pieces of your puzzle… advance the villains scheme a half step… rinse and repeat until the climax. Bring together the whole team. The McGuffin is found / the super-move is unleashed / the villain makes a crucial mistake. The day is won. Then end with some witty banter, make a few people kiss, and call it a day. I know I’m making sweeping and irrational generalizations here… but as I looked over the last batch of team-based books I’d read? This is exactly what they boiled down to. It’s also why the mainstay of my pull list are solo-outings, and indie books.

Let’s be clear, there have been (and will certainly continue to be) great assembling of teams. Joss Whedon, long before his box-office behemoth days, penned the single greatest X-Book I’ve ever been privy to. His Astonishing X-Men was layered, nuanced, and so beautifully written that it made me believe I could like the X-Men.

And I tried. One arc post-Whedon and I was back out. Why? Because of this modern mentality of the ever-changing team. It’s not enough that both the Big Boys churn out dozens of teams, but now each of those teams changes membership like I change ironic tee-shirts. I recall, in the late eighties, Marvel used to put the heads of the team members in the upper right corner… so you could tell the teams apart. Nowadays, they might as well link to the Wikipedia page of the comic on the inside front cover. Maybe they could text you mid-issue as the team roster changes.

What happens when you continually shift a team based on the needs of your arc, as a writer, I believe it shows your hand. Like the always-entertaining Justice League Unlimited cartoon where the League expanded to such depth that each episode could only follow a handful of heroes (something Jonathan Hickman is obviously turned on by), the team was obviously selected for very specific moments. It lessoned the impact when it came down to brass-tacks. And when a new writer picks up a team book and gets free reign to recruit, it’s becomes painfully obvious where the book will head. Whedon stuck to a core group of five muties, and only added one additional when it made complete sense to the narrative he was exploring. By limiting his team across four volumes of stories, he was able to truly explore the dynamics across the board, and present a total package. It was a time where in fact, the book was better because of the sum of its parts. This is in direct opposition today, where the Justice League, X-Men, and Avengers titles play Russian roulette with their ranks every six issues.

In essence, when you change the guard, you give away the ending. After the first arc of Astonishing, all the cards had been played, so-to-speak. By sticking to that roster? Whedon showed (like in the best ensemble sit-coms) the pudding is in the cracks. It’s not enough to use, abuse, and move on. When you’re stuck with one cast, you’re forced to explore relationships. When you can change stars on the fly? You’re telegraphing everything you plan on doing. And if you dare not use one of those shiny new toys from off the shelf? You’ve angered the fans who signed up in the first place. I can’t wait for my best friend to curse the heavens when Darkhawk is wasted in the upcoming Avengers: The Hunger Games in a few months. But I digress…

Is it too bold to ask for a great disbanding? Would sales truly plummet if Vibe doesn’t get to be in a book? And would Marvel simply cease to profit if Wolverine had only a solo title and a single X-Book? I tend to believe that in the world of team fiction… less is always more. Grant Morrison’s Justice League followed the Magnificent Seven ideology and lasted damn near four years. Try keeping the same smattering of supes for that long today and people might just get antsy. But then again, neither Marvel or DC will be happy to maintain a status quo for four months, let alone four years. Call me cranky, but the seams are starting to unravel a bit. It took five feeder movies to assemble a team worth two billion dollars.

Perhaps the powers-that-be should get the hint. A championship team takes time to build. Keeping them together is what makes a dynasty.