John Ostrander: Seduction of the Gun 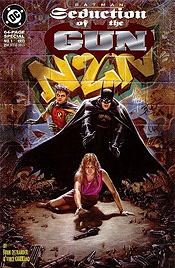 In the wake of the terrible shootings in Aurora CO during the midnight showing of The Dark Night Rises, I was contacted by television station WRTV in Richmond VA to comment about my Batman anti-gun violence book, Batman: Seduction of the Gun, that was first published in 1993. Those interested in the interview can find it here.

The stand-alone Batman story was done in response to the killing of John Reisenbach, the son of a Warner’s executive. DC wanted to respond at the time and it was felt that Batman was the logical choice for the story as his own parents were victims of gun violence and had a well-known aversion of handguns.

Denny O’Neil was the Batman editor back then and offered me the writing job, knowing I had once worked with an anti-gun organization. Denny emphasized that we couldn’t just preach; first and foremost we had to tell a good story. We could make our points but they had to be part of the story. I had no problem with that; it’s one of the lessons I learned from studying Shakespeare – theme should be hardwired into the plot.

I took what I knew and then researched more. One of the things that I learned was about “straw men sales.” If you lived in a state or municipality that had strict laws about the sales of firearms, you could get around it by having someone in another state buy the gun(s) for you, even in bulk. Gangs in New York City were doing that down in Virginia. I used that as a small section of the overall story, but it resonated. Virginia’s then-governor L. Douglas Wilder used the comic to help get his modest but controversial gun control law passed – buyers could purchase one gun a month. You could have belonged to a “Gun of the Month Club” and still been perfectly legal.

I was and am proud of the book. I’ve been asked recently if I thought that DC might or should reprint it in light of the events in Colorado. I’ve thought hard on it and I’ve come to my own conclusions.

I want to say, first of all, that I have no idea whether DC has any plans to re-issue Seduction of the Gun. They haven’t said and I haven’t asked or suggested it. I don’t think they will re-issue it, however, and perhaps they shouldn’t. There are reasons why not.

First of all, it would be months before it would get out there. It would have to be solicited in the Diamond Catalog and that’s planned way ahead. I don’t know as it would appear before next year and one could question the relevance.

Second, even if the book was re-published tomorrow, this is an election year and everything gets politicized. Putting Seduction of the Gun out there now would be characterized as a political statement and I don’t think it’s one either DC or Warners wants to make. The Dark Knight Rises is already connected with those terrible murders and I can’t see Warners wanting to keep reminding people of that. They want to sell tickets. It’s hard enough these days to get people to come to the movie theater instead of just waiting to see it at home. This wouldn’t help.

Third, what audience would the book reach? There’s no stomach, no political will these days, for a further conversation about gun control or banning guns. None. Sales of guns in Colorado spiked following the tragedy. Furthermore, in the comics community, any time you do a story about an issue these days a certain very vocal percentage of the comics’ blog-o-sphere dismisses it automatically as an “Afternoon Special.”

Finally, and I don’t want to seem too bleak here, but what good would it really do? Yes, Governor Wilder used it at the time to pass his gun control legislation but that law was repealed not long ago. You can once again buy as many guns as you want in Virginia. I heard one leader in the VA government claim the law wasn’t really needed now – that they had background checks and such to prevent bad things from happening. Tell that to the victims of James Holmes. He was able to legally get all the guns he wanted.

Let me be clear: I’m not in favor of banning guns and never have been. At heart, the country is not prepared to go for that and I think you would create the same sort of situation that the government did when it banned alcohol, that it does now in banning marijuana – people wouldn’t/don’t obey resulting in a large sub-rosa underground market that would make plenty of money for Organized Crime. There are also plenty of people with a legitimate reason for guns and rifles – hunters, for one example, and on farms and ranches there’s a need for pest control. That’s always been true.

On the other hand, what need does any private citizen have for an AK-47 or similar attack rifle? Explain it to me, please, someone. It might be argued that people have a perfect right to own them and its guaranteed by the Constitution. I’ve read somewhere that your Constitutional right to self-expression ends where your fist hits my face.

I’d say the same thing applies to a bullet.

When I wrote the story, I thought it was important for the reader to have characters who were sympathetic who became victims of gun violence. I wanted the reader to feel for them, to identify with them, so they would feel some sense of loss at their deaths. You can’t argue with a closed mind but you might be able to reach people by engaging their hearts. In the Aurora shootings, there are stories of people dying to protect ones they loved, shielding them with their own bodies. There was the single father who was out with his kids for the day. There were the very young children who were shot or killed. If these true stories don’t engage the heart, I don’t know what my fictional story will do.

I would love if Seduction of the Gun became anachronistic; my fear is that it will remain relevant. The cycle will resume – more gun shootings, more hand wringing, more passionate defense of perceived Constitutional rights, and nothing more will happen. That’s the life we live.