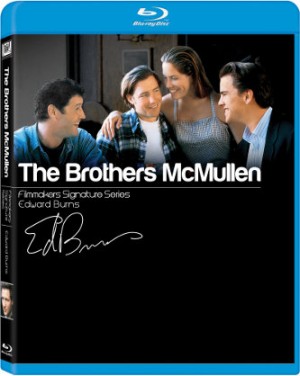 Few made a bigger debut in the 1990s than Edward Burns who wrote and starred in The Brothers McMullen, which remains a quiet classic, often overlooked. These days, he is perhaps better known for his run on HBO’s Entourage, playing a version of himself. Thankfully, he continues to be a creative force, continuing to appear in and make movies. Still, his first offering is worth a look and thankfully, 20th Century Home Entertainment has given us a new Blu-ray edition as part of their Signature Collection.

What makes his first movie so powerful is its storyline and sparseness. Working on a shoestring budget, the film lacked a large production crew, shooting on location without permission while his mom made lunch for whoever was on set that day. It was guerilla shooting fueled by passion and it all shows on the screen. As a result, you’re forced to focus on the characters and story and there’s plenty here.

At the funeral for his father, Finbar “Barry” McMullen (Burns) says goodbye to his mother (Catharine Bolz), who will be returning to Ireland. We then jump ahead five years to see that Barry and his brothers are all dreaming and struggling. Jack (Jack Mulcahy) and his wife Molly (Connie Britton), still living in the McMullen family home, are straining as she wants to start a family and he’s resistant to the notion (igniting an affair). Then there’s serial dater and would-be screenwriter

In an ironic touch Patrick (Mike McGlone), the most devoutly Catholic of the Irish brothers, is dating Susan (Shari Albert), a nice Jewish girl whose father wants to shower them with an apartment and give the man a job. Marrying her has Patrick scared. Barry is a serial dater and would-be screenwriter who is ending his latest relationship with Ann (Elizabeth McKay), leaving him homeless.

We pick up on the occasion of Molly’s thirtieth birthday party and then we follow the next eight months of their lives and it’s never short of fascinating as events force the three brothers to once more be living under the same roof, with all its ghosts and memories. In time we come to understand that the boys are mostly worried about recreating their parents’ loveless marriage, raising a cold family largely in caused by their father’s alcoholism. The cycle may be broken when Barry begins seeing Audrey (Maxine Bahns).

Overall, the performances are spot on and it’s refreshing to see Britton early in her career at a time she is shining on ABC’s Nashville.

This is well worth a second or third look and thankfully the Blu-ray transfer of the 16mm film is pristine. The disc comes with a commentary from Burns, honestly revealing the trick she used to get this film made while still working for Entertainment Tonight. Culled from previous versions is Fox Movie Channel Presents Fox Legacy with Tom Rothman (14:26) which reminds us this was the first release from the Fox Searchlight label. The Signature case includes a glossy insert with production notes about the film.