What does the Disney / Lucasfilm purchase really mean? 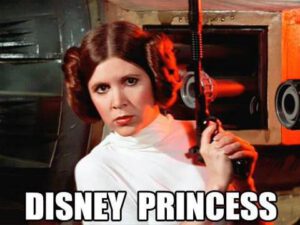 OK, you’ve already heard the news.  The final selling price…well, more wealth than YOU can imagine!

Slowly but surely, intellectual property is flowing into larger lumps, eerily mimicking the actions of the country’s banks.  The WWE owns the assets of its former major (only) competitor, WCW. Dreamworks owns Classic Media, which means it controls a massive library of classic animation and TV, including Jay Ward and Harveytoons.   Disney now controls its own properties, the Muppets, Marvel Comics and now Lucasfilm.  They also finally got back the rights of one of Walt’s earliest creations, Oswald the Lucky Rabbit, which he had done for Walter Lantz.  He’s now starring in their [[[Epic Mickey]]] video games, and now that they own him outright, I’m sure there are plans for using him as well.

If there’s one thing Disney is good at, it’s finding innovative ways to use and market its properties.  In addition to the promised new Star Wars film in 2015 (get in line now!) I expect they already have a full list of plans to execute. Here are our predictions…

Star Wars VII, starring…? The way it was at first, Lucas swore blind that Star Wars was a nine-film cycle, with The Holy Trilogy making up parts four, five and six.  The Prequel Trilogy went back and showed us the rise of the Empire and the fall of Anakin Skywalker.  And somewhere in the middle of their production, Lucas swerved us and said there were only to be six films, and were ever only to be six films.

We’ve seen numerous versions of the events after Return Of The Jedi in the comics and the novels.  Most involve the characters we know and love, and some are brand new stories with new characters.  Which of those timelines should be chosen for the new films?  The rule of thumb is always “what happens on screen is canon”, so they could easily go a new route.

But if they want to feature Luke, Han and Leia, who would play them?  The story could easily be set 30 years after the fall of the Empire, which would allow the original cast to play the roles believably…but would they?  Could Disney talk Harrison Ford back to the dance with the one that brung him?

It might be easier than expected.  Going back to George’s original claims, the only characters that would be in all nine films were Artoo and Threepio.  And as long as Anthony Daniels can be propped up to a microphone, and Kenny Baker can be dropped in a garbage can, that’s easy enough to handle.

Disney will attempt to leverage Willow as a viable competitor to Lord of the Rings. Jay Rasulo, Disney’s senior executive vice president and CFO, said on the conference call about this that “Our valuation of the Lucasfilm acquisition is almost entirely driven by the Star Wars franchise.”

Lucasfilm did do a few other things, and one of them was the sword and sorcery film Willow, starring Warwick Davis, Billy Barty, Val Kilmer and Joanne Whalley.  It was good, really.  But it didn’t seize the world by the short and curlies like Star Wars did, and it was quietly shelved and forgotten.  There’s a DVD-release from 2001, but I expect at the VERY least we’ll see a Blu-Ray herded through quickly before the Hobbit trilogy is out of theaters.  A new film is not outside the realm of possibility either, I believe.

A new animated series or two. Disney and animation go together like politics and corruption.  Where [[[Star Wars: The Clone Wars]]] once stood alone, we will see new series, aimed at all sorts of new demographics, not just existing fans.

Clone Wars did a stellar job of creating a fandom all its own, young people who, in many cases, have never seen the original films.  To them, Anakin is the star and the hero.  Disney could easily start any number of new storylines taking place in the Star Wars Expanded Universe, pepper the odd cameo appearance, and set off in new directions, each amassing its own fandom. And Disney has done very well taking Marvel properties, animating them, and putting them on Disney XD.

My money’s on a series titled “Little Jedi” about the younglings in Yoda’s class, dealing with problems like bullying and peeking during lightsaber-drone-practice.

At least three Star Wars related comics from Marvel, which will somehow, miraculously, fall outside of Dark Horse’s license. Disney dropped BOOM! Studios like a hot rock once they bought Marvel, not that Marvel has done anything to speak of with the stable of characters yet.  Of course, the relationship between Disney and BOOM! was just a-borning; Disney and Dark Horse have 20 years of history.

While they might not yank the license right away, there’s every possibility they’ll come up with new characters, titles and facets of the history that will fall outside of Dark Horse’s license, something they can then produce at Marvel.  Just like the animation route, there’s almost no limit to the directions they could go with new properties.

Licensing, licensing, licensing! Lucasfilm is in the top twenty licensors in the world based on worldwide retail revenue, with $1.5 billion in 2008 alone. Disney is number one. And now Disney has a whole bunch of new stuff to put in their stores and theme parks, while Lucasfilm has dedicated sales channels and the biggest licensor sales push behind them. While we’re a little bit disturbed at the idea of Leia being a Disney Princess, from a business POV it makes incredible sense.

Technical chops. Disney has done very well with a former Lucasfilm holding called the Graphics Group, part of the computer division of Lucasfilm before its spinout as a corporation in 1986 better known as Pixar. What will Disney be able to do now that it owns LucasArts, Industrial Light & Magic, and Skywalker Sound?

The fall of the 501st? While the Artists’ Alley Apocalypse has yet to occur, Disney is still exceedingly protective of its children.  They don’t allow people to wear costumes in the Disney parks, for example – the theory being that if an incident occurs with a costumed individual, tourists will blame the park, and not some zealous fan.

The 501st Legion (Vader’s Fist) is a worldwide club of Star Wars costumers who have taken scratch-building Stormtrooper and other Imperial armor building to a science.  They’ve raised many thousands of dollars for charity with their appearances.

All unofficial and unlicensed.  Words that turn a lawyer’s heart cold (if that’s not redundant).

Lucasfilm’s relationship with its fandom is legendary.  Will Disney be willing to cede that much leeway to the people who by now consider themselves almost co-owners of the franchise?  It will be an interesting thing to keep a few hundred thousand eyes on.

The loss of the Fox Fanfare at the beginning of Star Wars: Episode VII. Our own Glenn Hauman posited that one. The increasingly-anachronistically-named 20th Century Fox has been releasing the Star Wars films since, well, since there have been Star Wars films. With Disney now owning the franchise, it’s a fair guess that they’ll distribute them in-house.

But I’m not entirely sure that will be the case. I suspect they may have a long-term deal in place for the films, or at least a right of first refusal deal that Disney would have to offer a sizable amount to buy out. After all, it’s the only part they wanted.  Fox famously passed on buying the rights to Star Wars outright, electing only to distribute the film.  This has been largely seen as a move on the level of the guy at M&M/Mars who thought E.T. would never catch on, and the guy who thought The Beatles would never catch on, as guitar bands were on the way out.

Twice Upon a…oh, who am I kidding… Of all of Lucas’ projects, the one that’s the most fondly remembered and most oft forgotten is the animated film Twice Upon a Time. Produced in the cut-paper animation that the guys at South Park now only mimic, it was a unique bit of fantasy for a slightly older audience than the average animated film. Featuring voice work by Lorenzo Music, Marshall Efron and Paul frees, it has enjoyed a cult following since its long and repetitive run on HBO in the early days of cable TV.  Owners of its early video and laserdisc releases (raises hand) hold onto them carefully.

This is only hours after the news.  I expect we’ll hear far more clever theories in the days to come, both in the positive and negative.  What are yours?